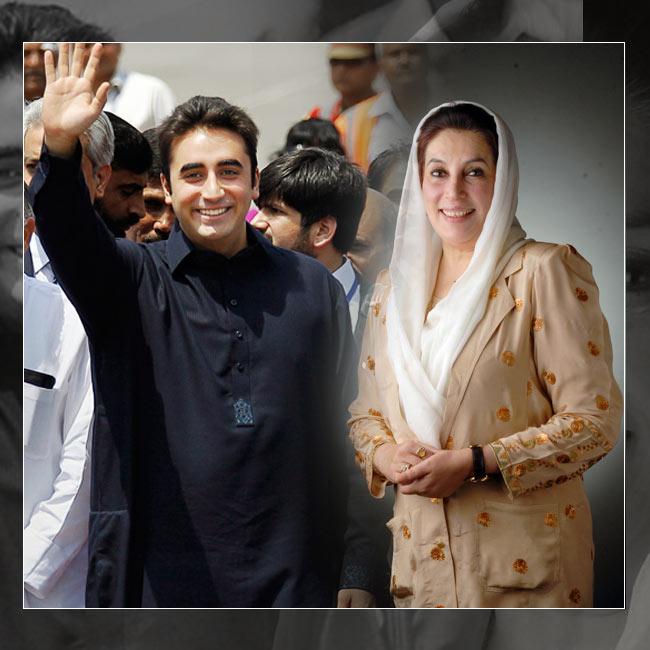 The Rise of Bilawal Bhutto Zardari

The core committee meeting of Pakistan Peopleâ€™s Party (PPP) recently decided that the party chairman Bilawal Bhutto Zardari would start the democratic journey from October 18, 2014. Bilawal Bhutto Zardari will address the Jalsa at Mazar – e- Quaid continuing the journey initiated by Benazir Bhutto on October 18, 2007 as she had arrived to Pakistan during the dictatorial rule.

It emerged from the meeting that PPP has decided to hold big rallies in Punjab as well. With the rising graph of Mr. Imran Khan in terms of popular leadership and denting of vote banks of other parties, PPP was left with no alternatives. Bilawal Bhutto Zardari has to lunge in the political arena to save party and the vote bank. While facing daunting challenge of regaining its position as the real opposition in the country, PPPâ€™s chairman Bilawal Bhutto Zardari has announced to hold the large public gathering at mausoleum of Quaid-e-Azam in Karachi on 18th October to commemorate seventh anniversary of the twin bombing at homecoming rally of late Benazir Bhutto at Karsaz in year 2007.

Gilani, sees it as the re-birth and activation of the party from the point where Benazir left them. He said that the leaders and activists of PPP would accompany the partyâ€™s chairman as he would once again start the journey for completing the uncompleted mission of martyred but ever alive leader of PPP Benazir Bhutto. It seems that Bilawal Bhutto Zardari has taken an apt decision to embark upon the incomplete journey of Benazir Bhutto to conclude her mission as at present, the country requires struggle for strengthening democracy, Constitution, parliament, and for resolution of problems of impoverished people.

Former PM said that when Benazir Bhutto had arrived in the country on October 18, 2007, Pakistan was facing autocratic rule and was at the crossroads. She had come back to her native land to challenge the dictatorial regime and end it, for ensuring independence of judiciary and media and strengthening of the constitutional institutions. Benazir Bhutto had been warned and threatened against arriving in the country but despite these threats, she had the courage and love for the people of Pakistan to re-enter this jungle and maze of Pakistani politics.

He said Benazir Bhuttoâ€™s homecoming rally was attacked near Karsaz where numerous Jalais and party supporters were killed and injured, once again signifying the sacrifices rendered by Peopleâ€™s Party for the cause of democracy. He further emphasized that the previous PPPâ€™s government led by Asif Ali Zardari had taken steps for to safeguard and revive the Constitution in its true form and spirit and for strengthening and enhancing democracy and institutions in the country. Bilawal Bhutto Zardari is the best choice to put this plan into action.

Mr Gilani shared that he had realized the gravity of the situation when as prime minister of the country, he felt that the country was facing the most critical and serious issues in the form of terrorism, energy crisis, and deteriorating economic conditions giving way to problems of price hike and unemployment directly affecting masses. He reassured the people that Bilawal Bhutto Zardari by resuming journey of her mother would steer the country out of these major problems of the country as he would follow mission and vision of Benazir Bhutto and Zulfikar Ali Bhutto. Bilawal Bhutto Zardari will put the country back to the road of progress and prosperity.

Gilani further asserted on the occasion that PPP was the real opposition and the only formidable opposition political party in the country. The party was acting cautiously and in a responsible manner. The main objective in the current political turmoil in the country was to see that under no circumstances democracy suffers or is derailed. Benazir had given her life for the same cause and they wanted to avoid causing any damage to vision and mission of Benazir Bhutto and Zulfikar Ali Bhutto.

Moreover, he re-emphasized that PPP was the real opposition political party and was in fact â€œGovernment-in-waitingâ€ as PPP still at the moment had governments in Sindh, Azad Jammu and Kashmir, Gilgit- Baltistan, have majority in Senate, have the slots of leader of opposition, and chairmanship of Public Accounts Committee in National Assembly.

Finally, answering to another question regarding PPP support for Makhdoom Javed Hashmi in the by-election for National Assemblyâ€™s constituency in Multan, He said that PPP had awarded ticket for the by-polls to Dr Javed Siddiqui as Dr Siddiqui would be consensus candidate of the party for the upcoming polls.

Speaking on the same occasion, Leader of Opposition Khurshed Ahmed Shah said that as the partyâ€™s leadership had awarded ticket to Dr Javed Siddiqui, all concerned in the party were bound to lend support to the partyâ€™s candidate in the by-polls.

Adding his voice, the former Prime Minister Raja Pervaiz Ashraf said that October 18 was considered as one of the darkest days in the political history of the country when the welcome rally of Benazir Bhutto was attacked. It was a conspiracy that had been planned and executed by enemies of Pakistan who plotted against democracy and democratic leaders. He said that PPP would once again flourish under leadership of Bilawal Bhutto Zardari as being the party having roots and popularity in all parts of the country. He said the recent tour of BilawalÂ Bhutto Zardari of flood-hit areas of Punjab had proved that PPPâ€™s leader had charisma and following among public as people in flood-ravaged area including women and elderly persons. Bilawal Bhutto Zardari was warmly received and welcomed to their native lands as for that moment they had forgotten their personal losses due to heavy floods while in the form of Bilawal Bhutto Zardari, they found reflection of her martyred mother and leader Benazir Bhutto.

To a query, Ashraf said that PPP still had following and popularity base in Punjab as once in the past after general elections of 1997, the party had faced similar gloomy situation in Punjab but later the party had regained its position in the province till the next general elections. PPP will re-emerge from the ashes of Benazir and reach the pinnacle of popularity in the history of this country with the leadership of Bilawal Bhutto Zardari.

Pakistan: Government and Imran Khan seem to be in no rush to put a stop to political impasse
Lifestyle: The most beautiful Pakistani dresses displayed at PFDC Paris Bridal Week 2014
To Top