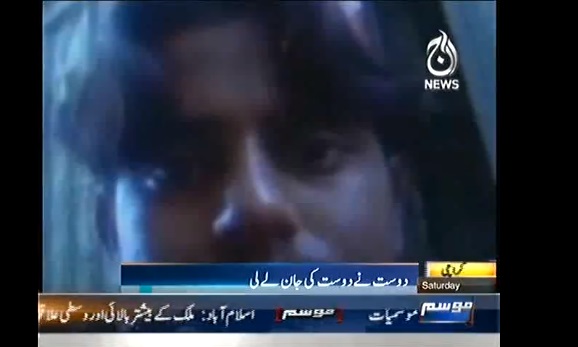 The people of Pakistan can be very strange. At one hand Pakistani nation is considered to be the nation which most enthusiastically participate in charity events and help everyone in need. On the other hand we see the same people of Pakistan frightening and murdering others over petty things. The logic behind this is beyond anyone’s comprehension level.

The video reports such a case where a Pakistani boy kills his best friend over a very minor issue. The fight started with arguments and then it intensified so much so that one friend killed another one. In the video it can be seen that the families of both the friends are completely tormented.

The current situation of Pakistan, both economical and political have effected the lives of masses. As per the reports every 4th person in Pakistan has become a victim of depression.  With this people have started behaving in a very odd manner. Poverty, and illiteracy and unemployment, terrorism are killing the nation.  The rate of suicide is increasing. In the past few years Pakistan has also experienced a rise in the crime rate. People of Pakistan are now losing hope in the government. They know that they are on their own and there in no one to help them.

If measures are not taken to resolve the issues of people of Pakistan, things could get even worse. People have got tired of living a deprived life, they are fed up of power and gas shortages. The people of Pakistan and getting more frustrated with every passing day. The physiological health of the youth of Pakistan is deteriorating day by day. Youth determine the future of a country and these developing psychological concerns can badly hamper the progress of any country.  Effective and sustainable steps should be taken by the government to provide relief to the nation in order to combat such concerns.