Pakistan’s cricket team’s unpredictability surprises everyone at every stage. And that tag makes them the most dangerous side in the world. Well, this time the U19 boys in green hit the mark as they secured their first win of ICC U19 World Cup 2020 in the opening clash.

In the South African city of Potchefstroom, Pakistan’s new bowling sensations crushed the opponent batting line-up with their exceptional skills and claimed a seven-wicket win over Scotland. Pacer Muhammad Waseem’s five-wicket haul and Tahir Hussain’s early wicket spell were the highlights of the game. Additionally, this is a great opportunity for the youngsters to show their skills and get their chance for the PSL. 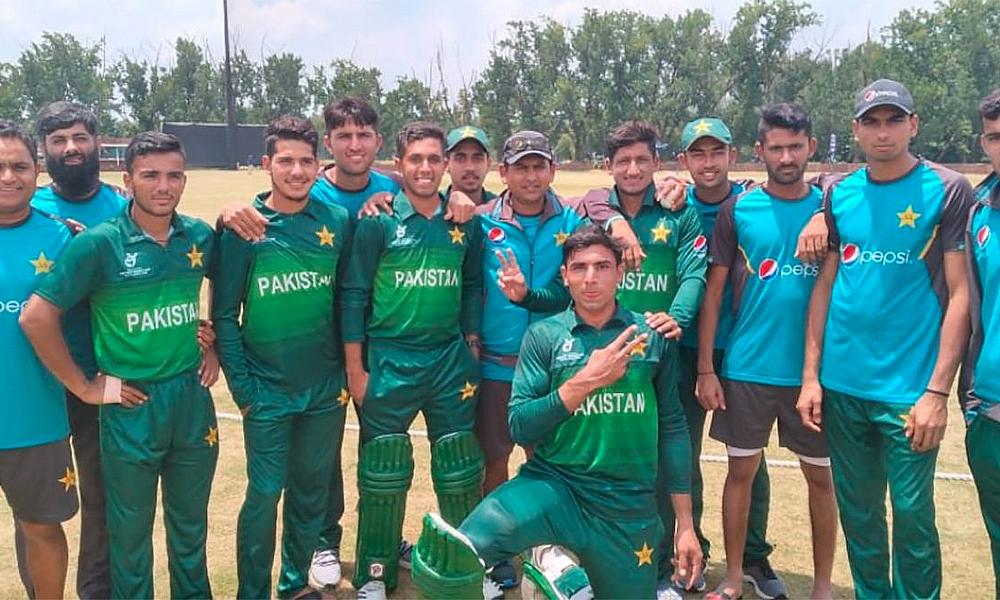 The game started after Scotland won the toss and opted to bat first. But unfortunately, they lost both the openers in the very first over, as Tahir Hussain sent the stumps of skipper Angus Guy and Ben Davidson flying. It’s very delightful to watch a young gun crushing the opponent batting-line-up in the early stages. Moreover, he is playing his first international match for Pakistan. Tahir then added the wicket of Tomas Mackintosh, who is the top scorer for the Scottish side with 20 runs.

After the amazing showcasing of bowling skills, another young guy took the charge and stole the limelight from there on in with a devastating spell. Muhammad Waseem who had replaced Naseem Shah in the squad showed his brilliance with the bowl. He claimed 5-12 in 7.5 overs to run through the remaining batsmen with the help of Abbas Afridi the other end, who got 2 wickets and gave just 32 runs.

Apparently, the first wicket of the right-arm pacer was of Jasper Davidson as he made full use of the opportunity with a probing spell of pace bowling. Meanwhile, Abbas showed his skills with two quick wickets then the bowl was again handed to the Waseem for swiping the tail end of the opponent. Thus, because of the excellent bowling performance, Pakistan restricted Scotland at 75 in just 23.5 overs.

In addition, the time had come for the Pakistani batsmen to show their class and clinch their first victory. Unfortunately, they had a similarly poor start as the openers returned back to the pavilion with just four runs on the board. Then the skipper Rohail Nazir showed his excellence with Irfan Khan. In a 47-run partnership, Rohail scored 27 off 23 balls, which included two fours and a six. While Irfan returned not out with 38 runs to his name. The right-handed batsman faced 37 balls, of which six were dispatched for fours.

Amazingly, It took only 11.4 overs for Pakistan to chase down the target,

They get their campaign off to the perfect start with a convincing win over Scotland.#U19CWC | #PAKvSCO | #FutureStars pic.twitter.com/g0iFwp6b5V

However, Wasim for his brilliant performance got the “Player of the Match award”

What a performance from this man!

As of now, Pakistan’s U19 team’s morale is definitely up with the amazing first victory. We hope to see some great actions again in the upcoming matches. However, the next target is Zimbabwe as Pakistan will counter them in their second group match on 22 January.