On the third day of Eid, while the nation was busy celebrating, our army men, including 3 officers laid their lives to make sure the celebrations continued. The incident happened in the Kharqamar area of the North Waziristan tribal district when the Army vehicle was on patrol.

As per ISPR, the military patrol vehicle was targeted by an improvised explosive device (IED) planted on the roadside. In the blast, four more soldiers sustained injuries too. The attack was carried out in the same area where the army had arrested terrorist facilitators in a search operation.

During the course of one month, 10 army personnel embraced martyrdom while 35 sustained injuries in the terrorist neglected areas of North Waziristan and Baluchistan. 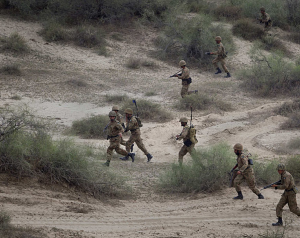 President of Pakistan. Arif Alvi and the Prime Minister of Pakistan Imran Khan have strongly condemned the terrorist attack in North Waziristan. They consoled the families of the martyred soldiers and officers of the Pakistan Army.

The president declared to the miscreants that the nation is united against them and is determined to restore peace in North Waziristan. He also prayed for the shaheed officers, jawans and their families.

In a separate statement, Prime Minister Imran Khan also condemned the IED attack on the Army personals in the Kharqamar area North Waziristan. He paid tribute to the martyrs for their bravery and courage and expressed sympathy for the families of the departed souls.

Prime Minister Imran Khan said, the brave tribal people are being used by some players but the state will not let anyone disturb the peace. He thanked the brave army soldiers for the sacrifices they make, in order to keep us safe.

Prime Minister assured them the nation strongly supports our army.

Firdous Ashiq Awan, the special assistant to the Prime Minister of Information and Broadcasting, also condoled the families and strongly condemned the attack. She said Pakistan stands united against terrorism.

A 12-Year-Old Hindu Girl, Jamna Was Intoxicated And Raped In Sajawal By Two Men And We Demand Justice!
This Letter From Cpt. Hassan Javed Written For His Family 15 Hours Before Shahadat Will Break Your Heart
To Top