They tried shedding their skin but the scars were carved deep into their bones. The news is flooded with the stories of acid and burn attack victims where the sufferers still lie in wait for justice. In the midst of the turbulent situations, many NGOs are concentrating their efforts in providing medical assistance to the victims.

Statistics revealed that from January to September 2014, about 42 cases of acid attacks had been reported only in Punjab, including both men and women as victims. Statistics also highlight that in most cases the most common cause triggering such a barbaric act was domestic disputes and the perpetrator in the majority of the cases was husband.

Besides domestic disputes, the other leading factors include revenge, denial of a marriage proposal, suspicion of illicit relations, marriages of choice etc. Among all other NGOs, Depilex Smile Foundation is leading in providing assistance to the acid attack survivors. The organization is not only motivated in providing medical care but also in providing adequate opportunity to become self-reliant and productive in their lives. In Lahore, there is a beauty salon which is different from all. 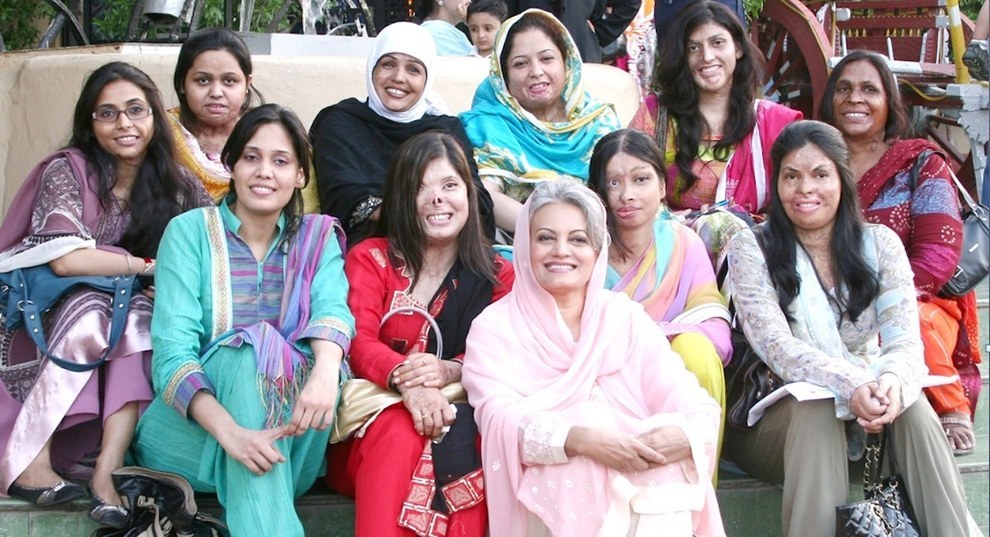 Here, the employees are those with scarred and charred skin, manifesting molestation at the hands acid attack survivors. These survivors make this parlor and their services special among all others. Depilex Smile Again salon is founded by a famous human activist and makeup artist Musarrat Misbah where she is dedicating all her efforts in giving new lives to the acid attack survivors. The philanthropic efforts of Musarrat Misbah and many others are helping in the reabsorption of these survivors back in the society along with their job placement, thus providing a meaning to their lives.

In addition to that, the issue of acid attacks gained international recognition in 2012 when Pakistani filmmaker Sharmeen Obaid-Chinoy won the ‘Oscar’ in the category of best documentary. Her film ‘Saving Face’ received tremendous accolades where she discussed two acid attack survivors and the arduous task of bringing their assailants to justice. The philanthropic efforts made by Sharmeen played a leading role in creating mass awareness regarding the suffering of acid attack and burn victims.

Another major area where the philanthropy is building its foundation is raising voice against child sexual abuse. Recent reports of children being sexually abused in the district of Kasur over a period of several years is appalling. The horrific crimes in Kasur underline how we must all do to protect children from abuses.

Investigations into this massive child abuse scandal- the biggest in the country’s history revealed that hundreds of videos were made battering minor victims, which was followed by blackmailing the children’s families. The child molestation was also coupled with threats of extortion and intimidation. The foundation of NGOs is still in their infancy stages with regard to child sexual abuse whereas, many other NGOs like Aahung and various other child abuse prevention societies are disseminating awareness among the public regarding reproductive and sexual health.

It is important to balance the grim realities such as terrorism, inflation, illiteracy rate and much more against the enormous positive potential that exists in Pakistan today. Pakistan is a nation that is blessed with tremendous natural and human resources. The role of non-governmental organizations in solving the intricate problems of our nation is commendable.

As per statistics, there are more than 100 organizations providing social services operating at grass root and advanced levels. Additionally, there are thousands of community-based organizations, informal associations, groups of volunteers and the initiatives by the universities and schools are making the best use of their potential insights and are contributing in catering the social needs of Pakistan.

It is the seminal point in the ongoing development and stability of Pakistan where there is a dire need for philanthropy and volunteerism. Pakistan has had a unique history of philanthropy and volunteerism, which still persists in our societal norms. People at individual and mass levels are making efforts towards the progress of Pakistan. The opportunities are great for individuals to stick their heads out and create an impact in the society.