The Green Passport is finally sailing through tougher times it has seen as the latest Passport Rankings for 2020 have been announced. The Passport Index, the world’s leading real-time passport ranking website, released the list for 2020.

After swimming with the fishes, Pakistan has gained 6 ranking points and now ranks at 192nd spot in the Individual Passport Power Ranking (IPPR). As per the details revealed, Pakistan jumped 6 places from 198 to 192 in the rankings.

As for the source of this list, the rank is a combination of the Mobility Score (MS), number of visa-free countries allowed to visit, visa on arrival, and UNDP HDI Index (United Nations Development Program’s Human Development Index). 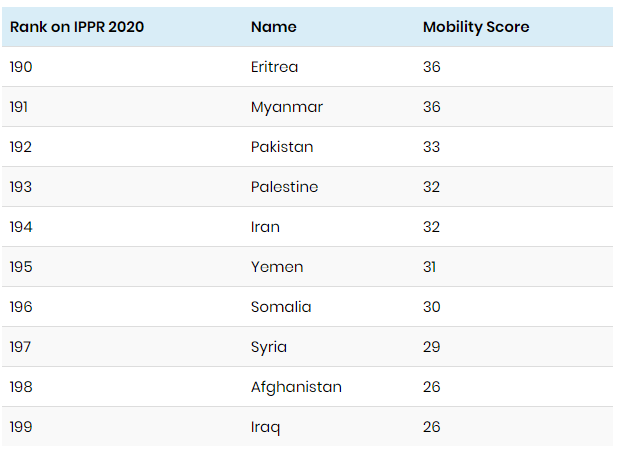 The IPPR is generally higher if the mobility score is higher – which serves as the main source of the ranking. Currently, the Pakistani passport sits at a Mobility Score (MS) of 33. Myanmar, which is on the 191st spot, a rank higher, has a MS of 36.

The lowest-ranked passport in the world remains that of Iraq (199 ranked) with a MS of 26 only. The Japanese Passport tops the list with an MS of 116. Ever since coronavirus hit, countries, passports, and visas have become ambiguous topics of discussion.

The Ministry of Interior (Pakistan) extended passport expirations dates automatically till June 2020, after offices have remained closed. Currently, no new CNICs and Passports are being made as all offices across the country remain shut.

What do you think of this? Let us know in the comments below.

This Girl Talks About The Importance Of Implementation In Our Lives!
Chinese Brand Apologizes To Muslims After Selling Prayer Mats As Decorative Rugs
To Top