Pakistani Fans Have Won The World's Respect By Cleaning Stadium Stands After The New Zealand Match!

The people of Pakistan set a huge example Wednesday, after Pakistan vs New Zealand world cup match, many fans stayed back to clean the Edgbaston stands. 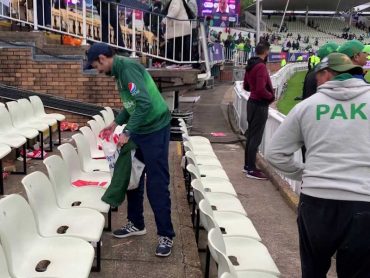 In a widely shared video on the internet, you can see Pakistani cricket fans picking up the trash from the Edgbaston stands before celebrating for winning their big win.

And This Is A Big Deal For Us, Because… You Know:

Now, this is something so unlike the Pakistani nation, we litter, we love to leave a ‘memorable’ pile of trash where ever we go. When the nation heads out to northern areas in the eid vacations, the beautiful mountain sights, rivers, and the roadsides end up as filthy as the streets in Karachi. 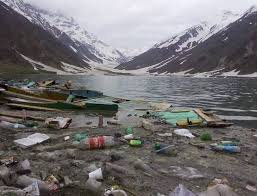 But, But, But, Things Are Changing:

As you can watch for yourself in the following video. The Pakistani cricket team beat the black caps by 6 wickets, mostly fans head out to the streets right after winning the match, but this time, the fans stayed back after the match, postponing the celebration to show a gesture of goodwill.

This is the video that went viral…

This might not be a big deal for countries like Japan, who are habitual of this trend, but for us, it’s special.

Pakistani fans are always special in their support!

Every match is a matter of life and death when it comes to cricket for Pakistan. Being a very “Jazbati Qaum”,  we love hard and troll harder. If the boys in green win the match we are all praises and if God forbid they lose, our sense of humor takes over the world. Most recently, after losing to India in the world cup match, even Indian fans admitted, Pakistan won the internet for trolling.

And when they made an entry to the Edgbaston:

Nobody can beat us in style..

These Pakistan fans have arrived at Edgbaston in some style ? #CWC19 | #NZvPAK pic.twitter.com/k299lpxmyk

And Now They are seen picking up trash to leave the stands clean:

See for yourself,  “Nahi hy Na umeed Iqbal Apni Kasht-e-veeran se” honestly, we are so proud of you guys and we wish, it becomes a habit for us. That Pakistanis, no matter where they go, clean after themselves, they don’t litter and start getting renowned for their cleanliness. Ah! well may that went too far but there’s a dream behind every reality.

Markhor Shoaib Akhtar Calls Afghanistan Team Haramkhor!
Yasir Hussain And Iqra Aziz Might Be Getting Married This Year!
To Top