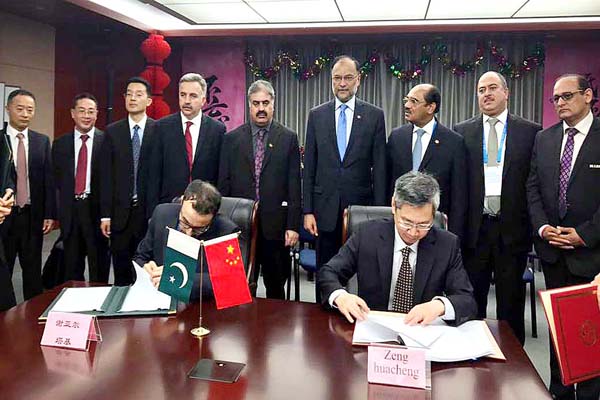 Pakistan and China signed various agreements and memorandums of understanding on making Gwadar a world class modern port city and on leveraging special economic zones to capture the window of opportunity for structural transformation in Pakistan.

The signing ceremony was held at Ministry of Commerce, the People’s Republic of China and was witnessed by the Minister for Planning, Development & Reform Professor Ahsan Iqbal and Chief Minister Balochistan Sanaullah Zahri, a press release said. Both the sides signed a contract of Gwadar Master City Plan.

Professor Ahsan Iqbal, speaking on the occasion, said that Gwadar, a jewel of Pakistan, is being built at par with port cities like Singapore and Hong Kong. As the gateway to CPEC, it has already started attracting the interest of investors, however, Gwadar would become an international smart port city soon, he added.

The minister said that the Gwadar Eastbay Expressway project has been initiated to construct 18.981 km 4-lane divided expressway with embankment for 6-lanes structures.

“It would integrate Gwadar Port with the Makran Coastal Highway as well as with the free zone and future container terminals”, he remarked.
Meanwhile, Pakistan and China signed MoUs on Leveraging Special Economic Zones to capture the Window of Opportunity for Structural Transformation in Pakistan.

It was signed by Project Director CPEC, Hassan Daud Butt and Professor Justin Yifi Lin, the Director Center for New Structural Economics (CNSE), Peking University. Minister Ahsan Iqbal said on the occasion that both the nations agreed to ensure cooperation for enabling joint research on the policy formulation for Special Economic Zones (SEZs).

“We agreed to work together to form synergy on policy formulation on SEZs, enhance coordination and deepen mutually beneficial cooperation in order to promote CPEC in a steady manner, realizing peaceful development and common prosperity of the two countries” the minister added.
He said, through this engagement, experiences, and lessons from the economic and social development activities would be availed to ensure the long-term and sustainable development of the two countries.

Minister on the occasion said Chinese companies should ensure knowledge transformation in the coal energy generation sector by linking with Pakistani engineering institutes. “Pakistan’s Engineering Councils could play a vital role by connecting with Chinese Companies for the creation of knowledge resource in this sector”.

No Loadshedding During Sehr, Iftar: Abid Sher
Students And Art Lovers Get Craft Skills At Lok Virsa
To Top