PAFMUN Is Having A Concert Yet Again, And Here Are All The Reasons Why You Must Attend It! 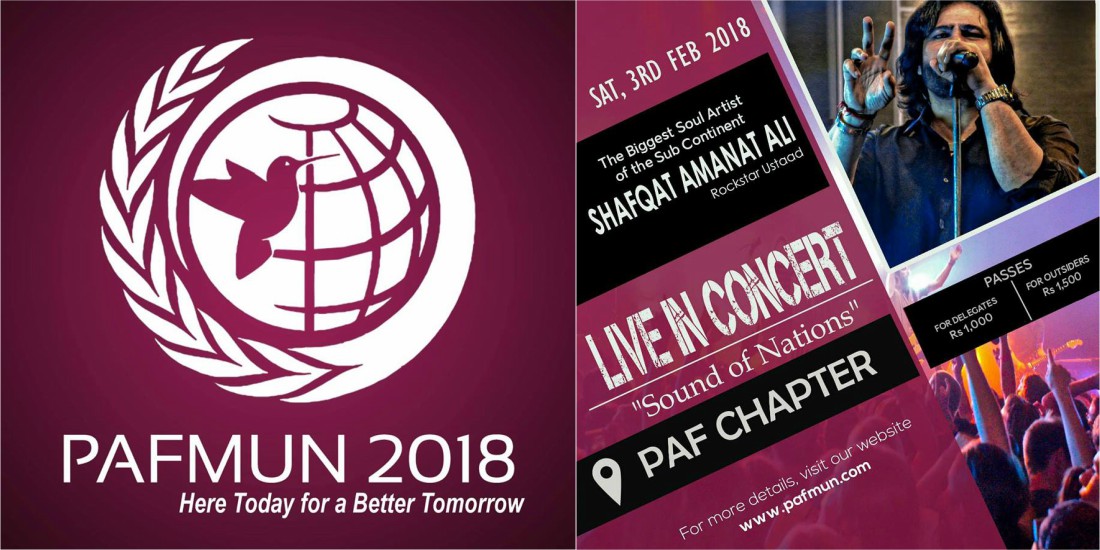 PAFMUN has always managed to create quite a stir, and it is not only for reasons you may believe behind all this talking. Aside from quality debates, PAFMUN merchandise has been really successful in giving much more to its participants and to the general public as a whole. Since its inception back in 2012, PAFMUN has secured the month of February for itself; events occurring around the same time encounter a stiff competition and they eventually have to bite the dust as PAFMUN remains unparalleled in quality and standard.

This time too, PAFMUN has a lot of plans in store. Taking the legacy of its ancestors forward; PAFMUN 2018 awaits you all with yet another event of the year. It presents a night full of excitement, entertainment, and a breathtaking performance:  A concert featuring none other than the Rockstar Ustaad: SHAFQAT AMANAT ALI. The artist is all to set the stage on fire with his electrifying performance on the 3rd of February 2018.The legend will mesmerize you with his captivating list of songs from Mitwa, Khamaaj, Tere Naina and Allah u Akbar. This is something no one would want to miss and here are all the reasons WHY:

Now for something everyone has been waiting for. Team PAFMUN proudly presents to you our first band for our second social of this year's conference, THE ALL GIRLS BAND (Nescafé Basement) With their hit cover of John Newman's Love Me Again on season four of Nescafé Basement these immensely talented girls have skyrocketed to fame. The song has over 431K views on YouTube. We have worked to bring you the best of the best and these girls are truly one of the bests in Pakistan as of right now. Breaking gender roles and going against the patriarchy in the industry is something we can totally support. More power to them! Get ready to have these extremely talented ladies bring the house down on the 11th of February. It's going to be an absolutely epic night. Stay tuned until tomorrow to find out who our artist will be! Winners for the lucky draw will be announced tomorrow as well. #HereTodayForABetterTomorrow#PAFMUN2017

Ever since PAFMUN started back in 2012, it has presented the town with colossal social events. Be it Roxen, Mustafa Zahid or Atif Aslam the PAFMUN stage has been graced by all. Similarly last year PAFMUN brought the phenomenal Ali Zafar on board. It will not be an exaggeration to say that it was the biggest concert Karachi saw last year. The audio-visual feast attracted the audience from all corners of the town making the night a colorful, entertaining, eventful and multi-layered experience.

Anyone who has been to a PAFMUN concert can easily relate to all I’ve said here and would probably want to relive those golden moments, so ladies and gentlemen here is your chance which you MUST not miss. When artists grace the stage at PAFMUN they certainly do grace to the stage. Hosting the best concerts in town is PAFMUN’s thing and no one does it better, in fact, no one can ever do it better. 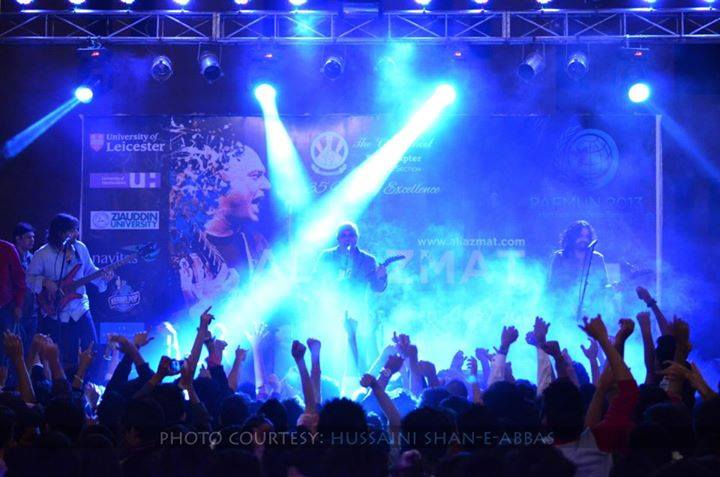 It takes a lot of effort convincing our parents into letting us attend gigs and concerts late night with our friends, now this is something every Pakistani can relate to, an, after all, their reservations aren’t just mere hearsay. The law and order situation here cannot be trusted and there is no denying that there are always perverts around who take more pleasure in harassing women rather than enjoying the concert and letting others have a frabjous time.

Security concerns are the prime reason people of Karachi are often deprived of fine experiences. Team PAFMUN and the management of PAF Chapter, however, places great value on the security of its audience. After hosting multiple successful concerts it is safe to say that PAFMUN has only made news for positive reasons. The college has more security than a forte in primitive times. PAFMUN promises not only external security but throughout the event, PAFMUN has volunteers available to ensure that rules are never breached and the security of every individual audience remains uncompromised.

Being a teenager myself I realize we are legit always broke. But you do not need to worry as PAFMUN takes great interest in making entertainment available to all. The audience can avail discount on passes, and on the purchase of multiple passes, one can even be entitled to a pass waiver. PAFMUN concerts are quite affordable as the objective is entertainment and not profit.

It is finally time to unveil the event of the year!Ladies and Gentlemen, this is the announcement we all have been waiting for, so brace yourselves for what is to come your way. PAFMUN-18 presents you with a night full of excitement, entertainment, and a breathtaking performance: A concert featuring none other than the Rockstar Ustaad: SHAFQAT AMANAT ALI Live. This is certainly going to be one of the biggest social events brought to you by a school in Pakistan. Watch him set the stage on fire with his electrifying performance on the 3rd of February 2018. So are you all prepared for his unmatched mellifluous soul stirring performance? The legend will mesmerize you with his captivating list of songs from Mitwa , Khamaaj , Tere Naina and Allahu Akbar. We can't wait to see you all there. Trust us when we say you don't want to miss this.*Grab your passes now!*

Music for our very own Rockstar Ustaad has no borders. With his dreamy voice and melodic charm, Shafqat has always managed to leave a mark. He is indeed subcontinent’s biggest singing sensation and he is all geared up to lure you all with his mellifluous and soulful voice. Whenever the legend has been on stage the sheer perfection of his voice has bewitched the audience and left them demanding an encore. This time too he’ll be setting the bar high with his classical numbers including Mitwa, Tere Naina and many more.

So well these are all the reasons for you to attend the concert, do you still wanna miss it? You don’t right? So what are you waiting for? Grab your passes now!

Read Also: The Sooper Junoon Concert Was An Absolute Hit With Karachiites And The Night Was Extremely Power-Packed!