One of the most notable drama’s aired last week on Pakistan television, Baaghi bided farewell to the silver screen. The show that geared much hype, based on the provoking storyline of the late internet sensation Qandeel Baloch, left everyone in tears.

Pakistanis Were Left in Awe After the Final Episode

No one has the right to kill. Either it's the rapist or one's own brother. Last episode of Baaghi made me cry. #QandeelBaloch

I was not able to understand why was I crying.After all that was just a fictional story.But that was not only a story that was story of our society in which we are living.Where men are given free hand to kill their sisters,daughters and wives in the name of fake respect.#baaghi

The Actors Indeed Did Justice to the Story of Qandeel Baloch

The Ending That Left Everyone in Tears

@s_qamarzaman today you made me cry… Every scene that you played as #QandeelBaloch simply hats?off for that.. We are so lucky to have an Amazing Actress like you- #Baaghi literally rocks #superproud
And that last part, you made me to love you even more❤️ pic.twitter.com/a3K2zgGWzz

Osman Khalid Butt, Who Played One of the Main Roles in Baaghi Shared his Emotions

Obi was doing a live feed with his friends while watching the final episode of Baaghi. During his live reactions came the ending part of the show – where Qandeel was brutally murdered and uttered the words that made everyone wondered how they’ve contributed to her death.

In his Live Feed, Obi Started Shedding Some Tears – Just Like All of Us

Do not watch this if you haven’t seen the last episode of Baaghi. I was sharing live reactions with friends as I watched and – I was not prepared. Baaghi broke my heart. And this part was like a punch to the gut. Still reeling.

People Were Praising the Show and the Actors’ Performances Throughout! 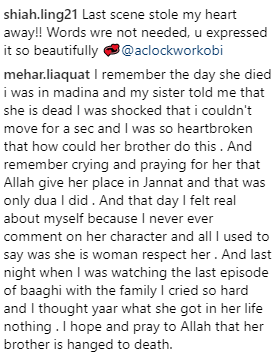 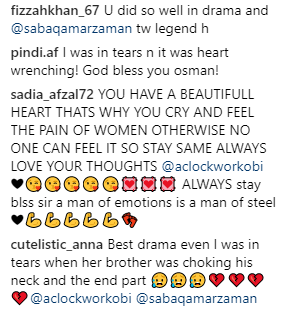 Congratulations to the cast and crew of Baaghi; you indeed did justice to Qandeel Baloch’s unheard story.