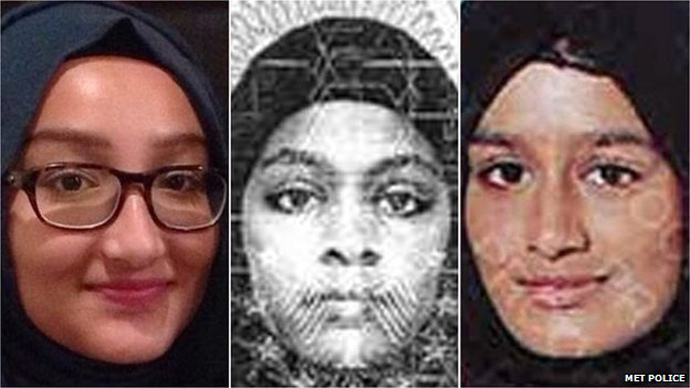 You won’t know me but like you I too am British and Muslim. Some of your friends may have gone out to join ISIS and you are also considering going out too. Social media is awash with accounts of how life is wonderful under ISIS; that you will be promised a husband and the chance to fulfil your religious obligation of making hijra. You may have even read stories of women describing how they are given free homes, maintenance, and a sisterhood made up of women from across the world and that ISIS provides security. But most of all you believe that the painful journey of leaving your parents and siblings is a pain worth sacrificing for the pleasure of God.

I have no other intention of writing this letter but to tell you that you are being lied to in the wickedest of ways. Just because your liars are cloaked in religious clothing, speak in a religious language, and claim to be speaking in God’s name does not change the simple fact that you are being lied to through a gross manipulation of the teachings of our faith. You are being lied to first and foremost about your religious duty as a Muslim but also about the reality of life under ISIS. And the thought of you destroying your life, for a pack of lies is what motivates me to write this letter. Because you deserve to know the truth and to live a fulfilled and happy life.

There is no religious obligation to make hijra or to pledge allegiance to this self-declared leader who claims to be Caliph. Muslims for centuries have lived in lands that were not under Muslim rule. Even during the Prophet’s lifetime, he did not ask those early Muslims who initially made hijra to Abyssinia to make hijra to Medina, when Medina was ruled by the Prophet (PBUH).

But this self-appointed caliph Baghdadi calls on you to make hijra you say? But I ask you, what kind of a caliph is this person who in direct contrast to the teachings of the Qur’an and our blessed Prophet Muhammad pbuh, justifies killing Muslims who declare the shahaadha including convert Abdul Rahman Kassig? How does he this so-called caliph justify killing innocent people? How does he justify the killing of Muslim leaders and scholars who only call for peace and love? The taking of even one innocent life is a great crime in Islam equated to killing the whole of humanity. Yet with so little regard, this same caliph justifies killing Muslims and non-Muslims alike including humanitarian workers like Alan Henning; a man who chose to give up celebrating Christmas with his family to instead help Syrian children.

Tell me what crime did thousands of young girls in Iraq and Syria commit to justify being sold into sexual slave markets and to be raped by ISIS fighters? I am not telling you a lie; ISIS’ own publications have openly stated this to be the case.

Tell me what reason is given for the destruction of centuries old churches and the killings of other minority groups like the Yazidis when God clearly states “For had it not been for Allah’s repelling some men by means of others, cloisters and churches and oratories and mosques, wherein the name of God is oft mentioned, would assuredly have been pulled down.” — Qur’an 22:40.

ISIS omits to tell you that for centuries Christians and other minority groups lived in the Middle East in harmony with their Muslim neighbours. Because it is rather inconvenient to their poisonous narrative of Islam. As Muslim jurist Khaled Abou el Fadl writes , the Qur’an teaches that the act of destroying or spreading ruin on this earth is one of the gravest sins possible. Fasad fi al-ard, which means to corrupt the earth by destroying the beauty of creation, is considered an ultimate act of blasphemy against God.

Those who corrupt the earth by destroying lives, property, and nature are designated as mufsidun (corruptors and evil-doers) who, in effect, wage war against God by dismantling the very fabric of existence, yet this is what ISIS have committed themselves to.

Islam does not seek to impose itself over other religions. The Qur’an states that God has made people different and diverse as a test so that we may come to “know one another, not despite each other”. Human diversity is, as Fadl writes, part of the divine plan, and the test is for human beings to co-exist and interact despite our differences.

ISIS state that girls should be married from the age of 9 and that women should remain “hidden and veiled from society” – but this stands in stark contrast to Muslim history. Islam produced some of the most amazing women who were anything but hidden away from society. Muslim women contributed to all walks of life including Fatima al Fihri who in 859CE founded the first academic degree granting university in Morocco. Asma Bint Shihab al-Sulayhiyya (d480/1087) who ruled Yemen with her husband as did her daughter in law, Arwa. Both these female heads of state were so respected that the Friday sermon in mosques were proclaimed in their names. Hidden, these women were not. The ISIL narrative of women flies in the face of Muslim history, the honour that Allah has conferred on women, and insults such great Muslim women who were pioneers in all walks of life.

ISIS claim to be calling for women’s liberation but do not be fooled – this is no liberation. This is subjugation and an abuse of women’s independence and authority that God has bestowed on women to be used serving humanity. Freedom is an essential core of Islam; ISIS only ever seem to deny it. Respect for life is a sacrosanct teaching of the Qur’an, yet ISIS only seem to cheapen it. Peace is what the Qur’an calls for again and again; yet ISIS only ever seek war and bloodshed. Some of the women who call you to ISIS are the same women who glorify the deaths of Muslims and non-Muslims and who call for the bloodshed of children in our country here in the UK.

What kind of Islam is this? When at its core Islam calls for the act of peace-making. Where is this peace in ISIS’s version of Islam? I see no peace, only death, destruction and misery. And this stands in stark contrast to centuries of Islamic tradition, a tradition based on mercy, compassion, pluralism, co-existence and human dignity.

You must know however, that once you go out there the chances of coming back are slim. Young women realising the error of their ways, have tried to escape but many have failed . The ability to fulfil any dreams you may have once had will be over as you discover how your identity, agency and freedoms are all denied and suppressed. ISIS’s treatment of women as second class citizens, is not the respect and dignity Islam promises women.

Finally, one can only end on the one person whom without you would not be alive today. Your mother. Your mother who for years raised and nurtured you, to enable you to achieve great things. Your mother who would lose sleep feeding you at night, who looked after you when you were ill and who would selflessly put you first, over and beyond her own needs. The same mother who would plait your hair for school every morning, ensured your uniform was ironed and your school bag was ready. And it is for this reason, mothers hold a special position in Islam. Your mother, your mother, your mother is what the Prophet Muhammad (PBUH) taught us. By asking you to leave your family behind, ISIS calls on you to turn your back on your mother.

Dear sister, do not destroy your life and your families lives by buying into a lie. You will find many of your fellow Muslim sisters have also rejected the call of ISIS as they have seen through the poisonous ideology it peddles. Feel free to contact me directly if you would like to talk more. And like so many others, join our campaign #MakingAStand. We are making a stand to reclaim our faith back from these extremists who denigrate Islam’s teachings. We are making a stand for peace, mercy, compassion and respect for others.

And we are making a stand against ISIS who instead, calls for bloodshed, death, destruction and rape. I hope you join our call over theirs.

Your sister in Islam, Sara