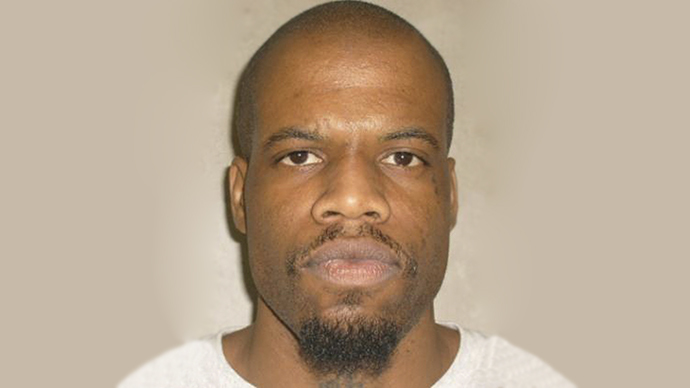 An Oklahoma prison inmate who was at the center of a controversy over the death penalty died of a heart attack after his execution went wrong, the procedure aborted after officials administered more drugs than necessary and bursting a vein.

Clayton D. Lockett, 38, was scheduled to be executed at 6pm local time Tuesday with a combination of lethal drugs, details of which were kept secret despite a flurry of court challenges and commentary from Oklahoma lawmakers in the weeks leading up to Lockettâ€™s death.

Bailey Elise McBride, an Associated Press reporter, was on hand to cover the execution but quickly reported that, while the average execution takes just minutes to complete, media was kept waiting for word for nearly an hour on what happened.

Prison officials eventually admitted that they had to cancel the execution, which officially began at 6:23pm, because Lockett was still moving at 6:37 and looked up to say, â€œSomethingâ€™s wrong.â€

McBride reported that the inmate was â€œconscious and blinking, licking his lips even after the process began. He then began to seize.â€

Department of Corrections officials said at a press conference immediately following the would-be execution that Lockett had blown a vein and that they are not sure where the drugs went in his body, or how much of the injection his body absorbed. Locket died of a heart attack moments after his convulsion began.

David Autry, Lockettâ€™s attorney, told assembled media the execution was â€œbotched â€œ and that the state was â€œbound and determinedâ€ to put Lockett to death, adding that the entire proceeding was â€œextremely difficultâ€ to witness.

Lockett was scheduled to be executed just hours before Charles Warner. Following the incident Tuesday night, the prison director granted Warner a fourteen day stay of execution. A botched execution in Oklahoma could be a very big deal for various lethal injection cases across the US.

â€” Matt Pearce (@mattdpearce) April 30, 2014
The double execution was supposed to be the end of an arduous legal battle that has lasted for weeks. Representation for both Lockett (convicted in the 1999 kidnapping, rape, and murder of a 19-year-old woman) and Warner (convicted for the 1997 rape and murder of an 11-month-old girl) asserted that each inmate had the right to know which drugs would be included in the cocktail that would be used to kill them.

The state disagreed, with the matter going all the way up to the Oklahoma Supreme Court. In a 5-4 decision, the high court agreed with the prisoners and noted that the decision would be the â€œfinal determination of all issues presently pending before the court.â€

The court, which overturned its own ruling two days later, permitting the executions to go on as originally scheduled, was immediately criticized by Oklahoma politicians. Republican Governor Mary Fallin said that, because the neither inmate contested their guilt, the executions should both occur on Tuesday night.

â€œTonight, in a climate of secrecy and political posturing, Oklahoma intends to kill two death row prisoners using an experimental new drug protocol, including a paralytic, making it impossible to know whether the executions will comport with the Eighth amendmentâ€™s ban on cruel and unusual suffering,â€ Madeline Cohen, Warnerâ€™s attorney, said in a press statement Tuesday.