Following actor Sarah Khan’s wedding to the Pakistani singer Falak Shabir last week, Usman Mukhtar has gained the reputation of being a mojo. Well, you guessed it right! It is exactly the kind of mojo that we are talking about- one which brings two love birds together!

Mukhtar has been cast opposite to Sarah Khan in the drama serial Sabaat. As we all recently witnessed his co-star tying knots last week, we can certainly call him a lucky charm. Apparently, every actress he works with gets married right after.

Last time, the actor worked alongside Naimal Khawar. Anna was the debut drama of both Mukhtar and Naimal. The latter ended up tying the knot with Hamza Ali Abbasi. While Naimal said goodbye to her acting career after her first TV Project, he is successfully continuing his acting career. 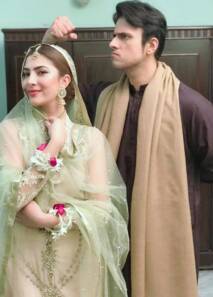 Mukhtar has now developed the reputation of being a lucky charm for people looking for love. In addition to this, both of his last co-stars got married after starring alongside him.

While the fans have already been trolling him for being the lucky charm to the Pakistani actresses, he also joked back that perhaps it is time he should do a solo appearance so that he himself can get married soon. We just love this guy’s sense of humor!

While all the social media users seemed to be cracking these jokes last week, Osman Khalid Butt came to the party a little late. However, it did not stop him to pull Mukhtar’s leg.

In addition to this, Butt took it to his Twitter and tagged Mukhtar, asking for his help to get married. He writes, “Bro meray saath bhi kisi dramay mai aa jao taakay meri bhi shaadi ho jaye.”

Later, he acknowledged that he is a little late to the joke and followed up his tweet with another hilarious one.

Just realized I'm about 12 days late with this joke.

Since OKB is widely known for his great sense of humor and comedic timing, the tweet had all the Twitterazi in fits! Mukhtar also once again proved his hilarious humor. In fact, the Sabaat actor has been in on the joke since it started doing the rounds last week.

Mukhtar gets back to OKB, saying let’s do it!

im here to marry u tho so umm

However, the fan’s reaction to his tweet is more interesting. Many of his female fans are offering him to marry them! Anyways, are you excited to see the two Pakistani heartthrobs together in some drama? Well, we sure are!