OGDCL discovered New Oil And Gas Reserves In Sindh And This Might Resolve Pakistan's Energy Crisis!

Oil and Gas Development Company Limited (OGDCL) sometime back in May discovered condensate oil and gas reserves in district Tando Muhammad Khan, Sindh which bore great news for the shaky economy of Pakistan. However, another reservoir in Sindh has been discovered. This time in district Sanghar.

The statement from OGDCL states that the exact location of the reservoir to be Pandhi area of Sanghar.

“The joint venture of Bitrism Block comprising of Oil and Gas Development Company Limited (OGDCL) as operator (95 percent) and Government Holdings (Pvt) Limited (5 Percent carried) has discovered oil and gas from its exploratory well Pandhi # 01, which is located in district Sanghar, Sindh province.”

“The structure of Pandhi # 01 was delineated, drilled and tested using OGDCL’s in house expertise. The well was drilled down to the depth of 3600 meters. The well has tested 9.12 Million Standard Cubic Feet per Day (MMSCFD) of gas and 520 barrels per day of oil through choke at Wellhead flowing pressure of 840 Pounds per square inch (Psi) from Lower Goru (Basal Sand) Formation.” 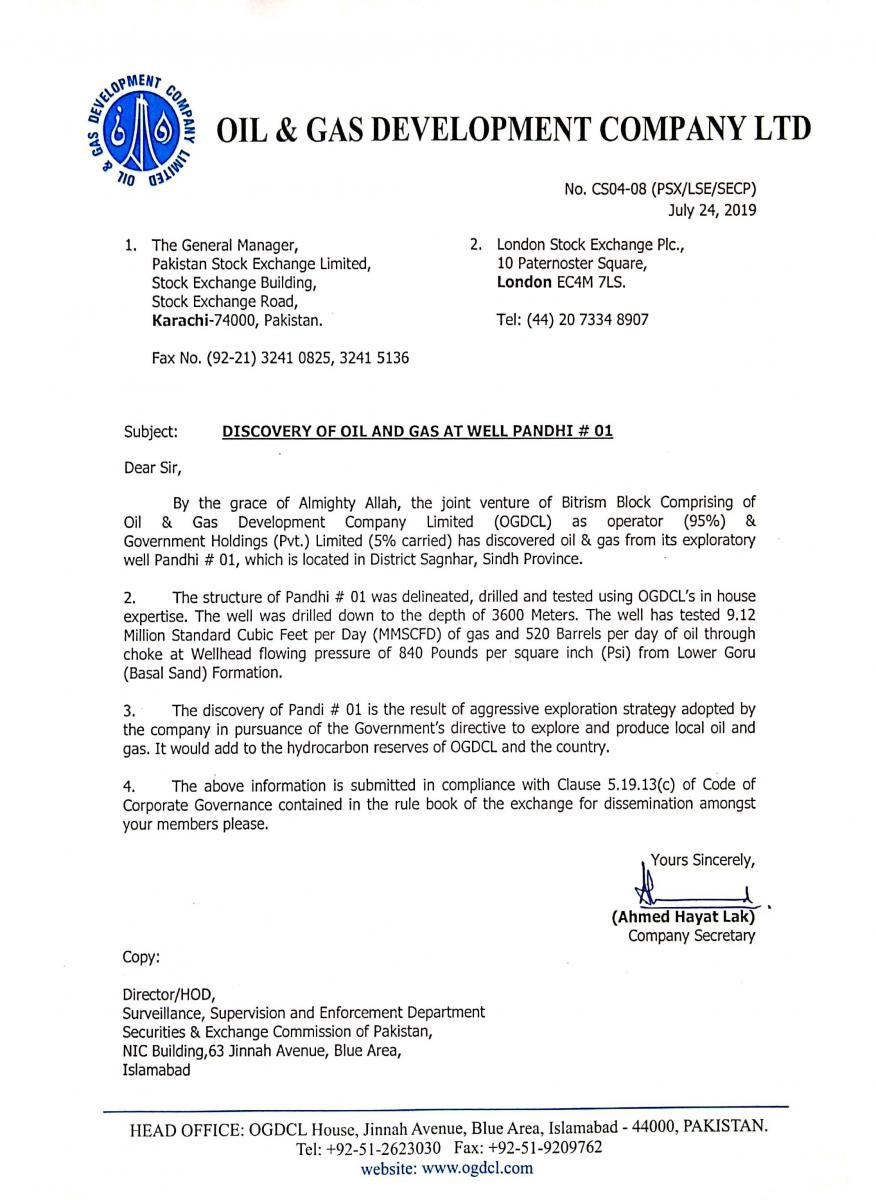 “The discovery is the result of aggressive exploration strategy adopted by the company in pursuance of the government directives to explore and produce local oil and gas. It would add to the hydrocarbon reserves of OGDCL and the country, the statement adds.”

Previously in May, Mangrio-1 well through which oil and gas was discovered in district Tando Muhammad Khan was “drilled and tested using OGDCL’s in house expertise.” Furthermore, OGDCL’s statement released upon this, said, “The discovery of Mangrio Well # 01, is the result of an aggressive exploration strategy adopted by the company. It has opened a new avenue and would add to the hydrocarbon reserves base of the OGDCL and of the country.”

Also Read: Saudi Arabia Is Providing Oil To Pakistan On Deferred Payments And PM Khan Is Living Up To His Promises!

Prime Minister Imran Khan acknowledged the commitment of OGDCL and gave appreciation certificate to Managing Director/CEO OGDCL Zahid Mir. These discoveries are great news for Pakistan, as not only it will help the country’s economic conditions by adding a great deal to the hydrocarbon reserves base but also resolving the energy crisis of the nation.

What are your thoughts on this new discovery? Let us know in the comment section below!

A Domestic Firm Will Develop IFE System For The PIA
This Stray Cat Was Killed And Hanged On An Electricity Meter And It Is Really Heartbreaking!
To Top