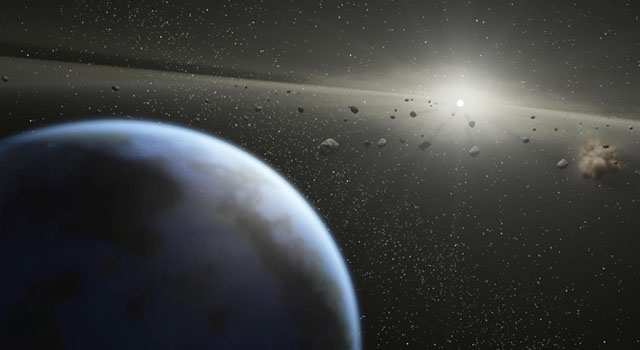 There have been 26 nuclear-scale asteroid explosions in the Earthâ€™s atmosphere between 2001 and 2013, according to a new report. The most powerful of the impacts was dozens of times the magnitude of the atom bomb that devastated Hiroshima, Japan in 1945.

Most of the asteroid explosions occurred much too high in the atmosphere to do any damage on the ground, according to findings by the Nuclear Test Ban Treaty Organization. The group operates â€œa network of sensors that monitors Earth around the clock listening for the infrasound signature of nuclear detonations.â€

The 26 incidents measured by the organization ranged from 1 to 600 kilotons of energy. The atom bomb dropped on Hiroshima by the United States, for example, contained 15 kilotons of energy, according to the B612 Foundation, which presented visualization of the findings at a press conference in Seattle on Tuesday.

The data show â€œthat asteroid impacts are not rare â€” but actually 3-10 times more common than we previously thought,â€ said Ed Lu, co-founder and chief executive of the B612 Foundation.

None of these 26 potentially-catastrophic asteroids were picked up or noticed in advance by any space- or Earth-based observatory, the Guardian reported.

Experts attending Tuesdayâ€™s event pointed out how random perilous asteroids can be and what kind of threat they are to Earth.

â€œBecause we donâ€™t know where or when the next major impact will occur, the only thing preventing a catastrophe from a â€˜city-killerâ€™ sized asteroid has been blind luck.â€

The most damaging asteroid to explode over Earth in recent times occurred in 1908 above Tunguska, Siberia. The energy yield of that detonation fell between the equivalent of 5,000 and 15,000 tons of TNT. About 770 square miles (1,239 sq km) of remote forest area was razed by the eruption.

Asteroid impacts with more than 20 kilotons hit South Sulawesi, Indonesia in 2009, the Southern Ocean in 2004, and the Mediterranean Sea in 2002.

More recently, an astral body exploded in the sky over Chelyabinsk, Russia with the strength of 40 Hiroshima bombs, temporarily blinding and deafening hundreds of people below and causing extensive property damage.

The B612 Foundation plans to launch by 2018 the worldâ€™s first privately-funded deep space operation, the Sentinel Space Telescope Mission. The project aims create an extensive map of the solar system and to identify potentially threatening objects hurtling toward Earth yet still millions of miles away.

â€œSentinel will detect and track more than 200,000 asteroids in just the first year of operation,â€ the B612 Foundation said in a statement.