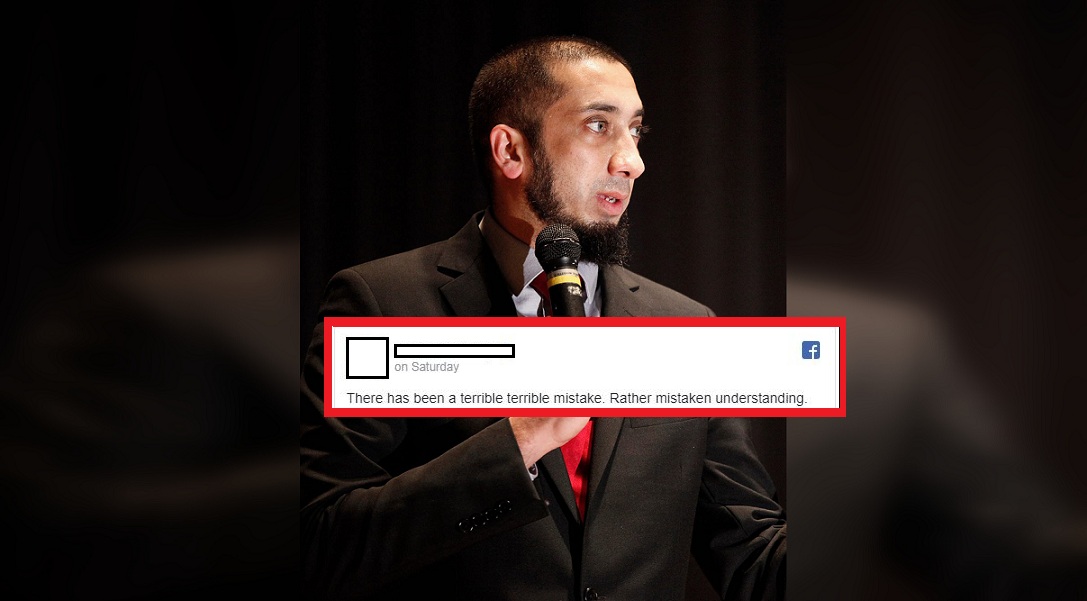 Islamic preacher Nouman Ali Khan is under the limelight for a grave controversy. People have levelled serious allegations against Nouman for misconduct based on some WhatsApp conversations. How much truth everything holds, only God knows… But developing stories have shaken the Internet and lend more credence to our confusion.

Renowned author, Rabia Chaudry shared the screenshots of the conversations that are being treated as an apparent piece of evidence against Nouman Ali Khan. Keep in mind, the activity was removed by Facebook.

So this guy made a mock-up of a conversation to show how easy it is to do so which is fair. I understand people think that could be the case with Ali. Except that an entire group of leaders and scholars investigated for months and verified all of the allegations.

I am sharing this screenshot because now people are sending it around thinking I actually had this conversation when it was created as an example by this person.

Keep in mind, the above conversation was created just for an example to show how similar conversations can be created.

So this guy made a mock up of a conversation to show how easy it is to do so which is fair. I understand people think…

About an hour later, she wrote how it had been a terrible mistake…

There has been a terrible terrible mistake. Rather mistaken understanding.

The screenshots I shared were from the website set up by the women bringing allegations against NAK. I do not have a secret stash of them, and I have nothing to do with the site. The site was crashing so I posted the screenshots of what was there.

Now I realize why I’m getting both incredible vitriol and unearned high fives. I didn’t expose anything, geezus. I just shared what was already online. I’m neither as brave or heinous as anyone thinks.

There has been a terrible terrible mistake. Rather mistaken understanding. The screenshots I shared were from the…

Rabia was actively sharing the controversy about NAK and now she provides a clarification and a developing story after learning some truth.

Amir Khan Turns Down Faryal Makhdoom’s Last Bid to Save Her Marriage on Twitter
You wouldn’t Believe how these Restaurant Owners Decided to celebrate their Partner’s Birthday!
To Top