Nouman Ali Khan Spoke About Everything Wrong With Desi Weddings and It Makes Complete Sense!

The desi weddings continue becoming extravagant. Everyone has a dream wedding and this dream wedding revolves around putting up a flashy show, wearing expensive clothing and of course, having more and more events. The concept of bridal showers, mayoun, mehndi, and Barat; the religion has never talked about these events. Such events are the adaption of the West and of other sub-continent countries.

In the race of living up to the standards set by our society and competing with the on-going lavish traditions, the society is amazed by expensive weddings. On the other hand, as soon as someone has a simpler wedding, it breaks the news and a lot of heads are turned as well. “Could they not afford to throw their daughter a lavish wedding? Is the family poor? How kanjoos!”

Worst of all, in the societal dilemma, most of the families take loans from banks and relatives to meet such lavish standard of a wedding that has been instructed to keep simple in terms of the religion.

As Explained by Nouman Ali Khan, There’s So Much Wrong with the Weddings Happening in the Desi Culture Nowadays!

The Islamic preacher begins by telling how families often take a loan of thousands and hundreds to have an elaborate wedding that consists of 8 different unneeded events. On the other hand, what’s required is nikkah and Walima only.

Based on the societal pressure to become better than the other, the major element is the way people throw their money. If you keep your wedding simple, people will talk and to avoid that, many compete with the wedding of their relatives because “Log kya kahe gay?” 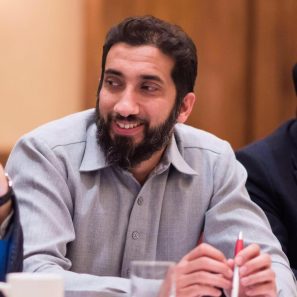 Nouman Ali Khan stresses further on how based on the pressure of the society, one takes an immense amount of loan. So basically, the new family which is about the start their new chapter of life starts it with loan and debt. “No wonder one of the main causes of early divorces is financial distress.” said the Islamic preacher. “And you are starting your new married life with financial distress.”

Khan then quoted the Sunnah of Prophet Muhammad SAWW, “The marriage which is most greatly blessed is the one which is the lightest in burden [expense]. However, if people are well catered for, without extravagance and show, there is no problem with that either.” (Reported by Bayhaqi)

He then shared an incident of how a man came to him for Nikkah. The man, before his Nikkah, was wearing an apron which had the blood of the animal he sacrificed. The meat of that sacrificed animal was used in the Walima as the food to give to friends and family. “Within 45 minutes, the affair was over.”

Read Also: Islamic Preacher Nouman Ali Khan Is Back And This Time, He Comes With A New Twist!

The video ends with Nouman Ali Khan saying how Islam and Allah have made things simple, but we make them difficult.

Here’s the link to the Video: