Islamophobia, racism and religious hatred have been giving rise to various hate crimes against Muslims in various countries around the world; mostly in the West. Cases of brutal attacks, armed and un-armed are increasing at an alarmingly rapid pace.

The narrative of Islam linked to terror and violence is still till this date is sold widely, brainwashing a majority through planned propagandas and campaigns. What’s ironic is that mostly it is the white-non-Muslim men that carry out hateful crimes.

Backtracking a little, in 2018, the ‘Punish A Muslim Day’ letters shook the Muslim families and were widely distributed in East London. The hate inducing letters encouraged people to verbally and physically abuse Muslims, promising certain points in return. The appalling act was finally taken action against and the man behind the campaign, David Parnham was placed behind bars.

“Punish A Muslim Day” letters are being sent to families in East London. The letter details a point system for each action & a reward. For example pulling a Muslim women’s hijab is 25 points, throwing acid is 50 points and burning or bombing a mosque is a whole 1,000 points. pic.twitter.com/6kmCrDrXt0

A recent event of brutal-violence against a Pregnant Muslim Woman.

Fast-forwarding to the current times, a 38 weeks pregnant Muslim woman was beaten violently with fits and kicks by a large man in Sydney, Australia. Moreover, it was a clear case of Islamophobia that cannot be placed under the veil of ‘mental disability‘. Many regarded it as ‘provocation’ from the Muslims seated in the restaurant. 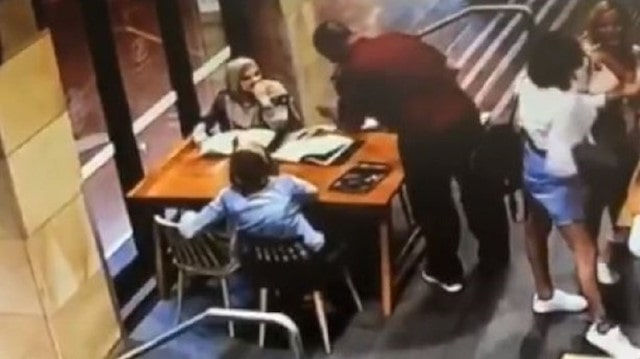 However, the surveillance footage has placed all worries to rest. The videos have spread far and wide, clearly showing a family seated minding their own business when a man approaches and suddenly started beating the woman. The video is hard to watch and is scary.

Moreover, another case of such nature has come forward and is taking the Muslim world by storm. This time, in Norway.

A Muslim man stops a racist man in Norway trying to burn the Quran.

This hateful man belonged from an anti-Islamic group by the name SIAN (Stop the Islamisation of Norway) that carried out this abominable hate-crime in the Muslim-populated city of Kristiansand. The holiest book, Al-Quran was almost set to fire when a man launched himself in the direction of the culprit and tried to stop him from committing such blasphemy. Unfortunately, the Norway police instantly got into action and pinned him onto the floor, while the man offending millions of Muslims, walked free.

In #Norway, the far-right and racist group SIAN(Stop the Islamisation of Norway) burns the #Quran, the holy book of Muslims.

The hate crime took place in the largely Muslim-populated city of Kristiansand. pic.twitter.com/5Nb8Plk807

This video became the latest topic of debate, garnering various opinions and sentiments towards it. However, the bottom line is that the racist man has disappointed every Muslim around the world. In addition, respect, love, harmony, peace, tolerance, and co-existence should have been a norm by now. Sadly, we are still living in dangerous times.

“Telenor Pakistan condemns acts that disrespect any religion. Operating in a Muslim country, we express our deepest concern over this act and encourage everyone to embrace one of Telenor’s key values of being respectful.”

Telenor Pakistan condemns acts that disrespect any religion. Operating in a Muslim country, we express our deepest concern over this act and encourage everyone to embrace one of Telenor’s key values of being respectful.

One of Telenor’s key values is Be Respectful. While this means respecting freedom of speech it also entails respecting people’s religion and culture.

The world reacted to this video.

‘The Defender of Quran’  is his title.

Ladies and Gentleman presenting you "The defender of Quran"
Salute you brother
❤❤#Norway#RealHeroOfMuslimUmmah pic.twitter.com/deQ8oJrBxD

Without a shadow of a doubt. In a bid to battle Islamophobia, Pakistan’s Prime Minister Imran Khan brought Turkish and Malaysian leaders together for a project that involves an English Anti-Islamophobia channel. Nonetheless, it is important for all Muslim countries to come together in this fight of false-notions.

Gonna Tell My Kids,This Guy is Real Hero
In Norway, a Muslim young man didn't tolerate the blasphemy of the Quran. He attacked the rasict and saved the Quran from burning. Salute to his bravery#Norway #gonnatellmykids pic.twitter.com/jtRCEyCQUo

Hopefully, the government and concerned authorities of Norway will not disappoint.

A racist group in Norway(SIAN)
tried to burn the #HolyQuran;while others watching this brave Muslim guy jumped over the safety fence and saved the HolyQuran.
The hate crime took place in the largely Muslim-populated city Kristiansand.Strict notice expected by the Govt of #Norway pic.twitter.com/SFEE7wqO1t

Another is of opinion that Muslims should stop discrimination amongst themselves and simply come under the umbrella of ‘One-Whole-Ummah’; only then, such hate-crimes will end.

Until Muslims don’t stop calling themselves Shia Wahabi incidents like #Norway will keep happening, no matter what life style u have , atleast label urself a Muslim not some sect name. True daring act by the young man.#ilyas_Hero_of_Muslim_Ummah#HolyQuran #Norway pic.twitter.com/7Z54brWptT

A question for the liberals and secularists, around the world.

Being aware of the aftermath consequences, my hero stymied the holyquran burning cermony. How will our so called liberal and sechular propagandist respond to this great sacrifice?

Islam can only be defended by true islamist people not by liberal and sechular assholes.#Norway pic.twitter.com/8maz7ai42x

‘Islam is a religion of peace’ – This fact is not only well-known but the enlightened non-Muslims accept it, as well. However, bigotry has always lingered in every society. Moreover, today this Quran burning incident in Norway was a grim reminder of the fact that so many anti-Muslim/Islam organizations exist around the world, working towards bringing havoc among the Muslims; attacking them, verbally abusing them and worse, murder.

Muslims nations need to address this issue together. One or two leaders cannot shoulder the entire burden of eradicating decades-old brainwash. We hope there will be a decrease in Islamophobic cases. Insha’Allah!

What are your thoughts about this story? Comment in the section below!

US China Trade War: XI Says He Is Not Afraid To Fight Back
Bride-To-Be Hira Was Shot Dead In Gulberg, Lahore!
To Top