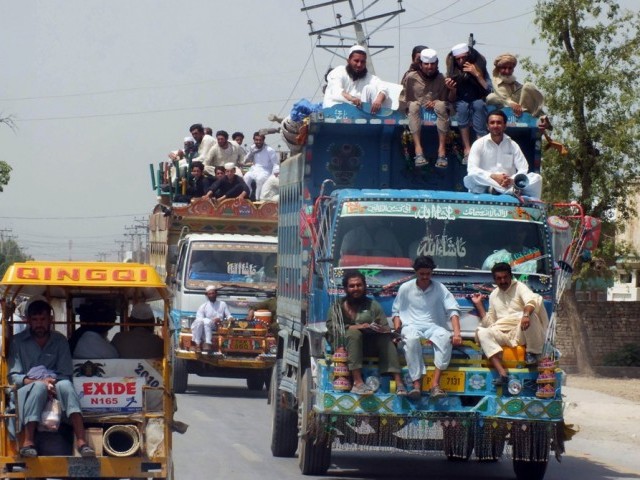 In the last 24 hours at least 9,000 families have been registered at border posts as they flee across to secure their livelihoods and support the Pakistan army to continue their fight against terrorism.

It is recorded that 20,000 vehicles were caught in traffic on the road connecting Bannu and Miramshah. In the sheer heat, the members faced difficulty during traffic jams with little food and water. With a large number of people migrating, the check posts were meant to have a slow process.

Sadiqullah, a young boy, had been declared dead due to the extreme heat near Bannu while unfortunately a woman passed away after luggage toppled off a vehicle.

An estimated of 1,70,728 people have migrated from North Waziristan due to the Operation Zarb e Azab without a single family being displaced in the process. These statistics have been provided by the government, however; the immigrants that carried on a protest outside the Bannu Press Club demanding minimum facilities at least.

Members of the Qaumi Walfare Jirga Waziristan Gul Naeem, Jamaldar Wazir and other student leaders said there was no proper arrangement for food, transport and residences for the IDPs. An evacuation from North Waziristan within three days was not possible due to the lack of transportation.

Uruguay vs England, World Cup 2014 – Highlights [video]
7 Most Unbelievable Laws Around the World That Make You Go WTF!
To Top