Famous Sports Brand Nike Does It Again - New Ad Suggests It Might Be Changing Islam!

When we talk about sports brands, Nike is one of the most well-known names that come to our minds. Nike has been influencing and impressing the world with its mind-blowing marketing concepts and motivational advertising campaigns. Apart from sports, and athletes, many people are actually interested to see their advertisements for the strong messages that they portray.

However, this time, it seems that Nike might have left a large chunk of its customer base extremely disappointed due to its offensive, and radical concept.

The latest Nike ad is based on a set of different themes, some of the most prominent ones can be referred to as defying odds, breaking stereotypes and also reaching for the stars by being the change.

Although, the notion of these themes seems promising and quite attractive, especially for a sports brand; it is where the thematics and portrayal come, things start to get a bit off track.

Before we unveil the major offense, why don’t you guys have a look for yourself!

Nike’s new ad campaign suggests it might be changing Islam!

The ad does comprise of quite a hype and can be seen as quite innovative. There is no denying that; however, it’s a minor snippet in the video which has enraged Muslims worldwide. As it can be seen that a woman in Burqa is skateboarding, soon transitions into a woman skateboarding and bearing the homosexuality LGBTQ+ flag.

And, Muslims are infuriated. Not only is it offensive to them, but it puts a huge question mark on the ethics and morals of the company, which claims to make shoes fit for all, without any racism or discrimination!

So the question again stays the same, isn’t portraying a religion, especially Islam in the light of backward thinking and transitioning into LGBTQ+ equally questionable?

Almost every day we get to see people raising voice on certain social issues and unethical corporate cultures. We do wonder how many people will raise voice on this matter. 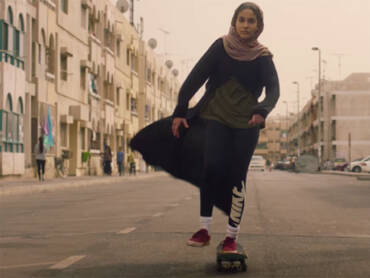 The worst part that seems to stand out like a sore thumb is how both two entirely irrelevant aspects such as the religion Islam and homosexuality being considered as polar opposites and in need of transition. This isn’t the first time a mistake has been made when it comes to Islam. A few days back, a Chinese brand was selling prayer mats as decorative rugs.

Deluding reformation of Islam or freedom of speech?

Now it isn’t so that there is anything wrong with the portrayal of showing Muslim women wearing a Burka and skateboarding which people are seeing as unethical. It is portraying Islam as a centuries-old religion. And the need for reforming it towards liberalism actually raises questions.

In addition to that, the advertisement also looks tad bit hypocritical is how they are showing the idea of ‘freedom of speech’; yet deluding young Muslims to reconsider and also reform their religion.

As of now, the brand hasn’t taken any action regarding their inappropriate ad campaign. All we can do is hope that it happens soon; and corporate brands understand the importance of ethical boundaries and standards that they mustn’t cross real soon!

Over 300 Tons Of Trout Will Be Wasted If COVID-19 Lockdown Continues In Pakistan
Good News! Amazon Is Finally Entering Pakistan To Provide Web Services
To Top