It seems that for Pakistani’s the concept of weight gain and weight loss is subjectively limited to the implication of fat and thin. They don’t see beyond the image of too fat and too thin and the chances of how these physical attributes if commented negatively on is actually a humanitarian offense known as body shaming. Recently well-known celebrity Mawra Hocane was body shamed for her major weight loss during quarantine.

Everybody knows that celebrities are always under the spotlight. May it be due to their upcoming drama serial or film, some controversial post, a statement regarding a matter, or simply because they are a celebrity. With the positive vibes of love and admiration from the fans; they also become vulnerable to the ugliness of the social trolling and getting body-shamed. 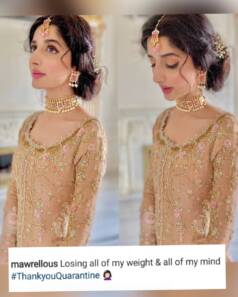 Simultaneously, the ever-jolly and bubbly Mawra Hocane became a target of the same misogynistic body-shaming due to her weight loss, that is like a second nature of Pakistani netizens.

Taking to her Instagram account the actress posted a picture of herself, where she was sharing with her fans about how quarantine caused her to lose so much weight and she is clearly upset over it. But the netizens couldn’t help it and body shamed Mawra Hocane.

However, what she didn’t see coming was how will people react to this. From calling her ungrateful and not beautiful anymore to labeling her as a skeleton, people kept on body-shaming her to a point that she was forced to delete her post.

Sad isn’t it? Apparently, people think it is cool to make fun of someone’s physical attributes and ‘mental health’ which is a concept completely alien to all of us. 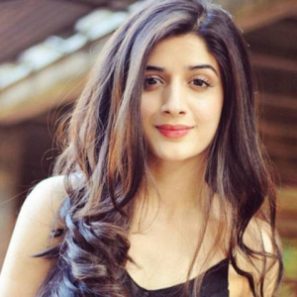 People tend to think that if they are abusing someone over their weight, height, skin, and other such physical features. The abused person must magically have the courage to overcome it. They don’t focus on how these issues can actually hurt and trigger more problems in the mindset of human beings.

Here is what people were saying to Mawra Hocane on weight loss. 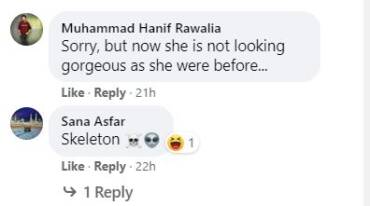 While the entire trolling and banter were going on some people even came up and defended the actress. Some even tried to prove and educate people about the importance of mental illnesses and health.

Agreed. Also saw a clip of some award show where the host suggests mawra need glucose (mazaak mai)… whats that all about? It’s saddening and I genuinely feel sorry….

Stop making fun of mawra just cause of her weight, judgemental society like you guys destroy someone's mental peace, Look she is skinny, Look she is fat, Stop this body shaming idiots ! Making fun of someone's appearance isn't humour, so called memers#MawraHocane

Some even used terms such as ‘anorexia’ and anxiety to prove the importance of mental health; and how such illnesses can harm the minds of people. However, all schooling fell on deaf years as the netizens continued with their banter, which was just for fun!

However, this isn’t the first time someone has been body shamed by the netizens, like Mawra Hocane, there are many. Just a while back a TikTok star was made fun off for actually making TikTok videos!

Moreover, we hope and pray that people understand the stigma of body-shaming and stop it real soon. In addition, we also wish Mawra Hocane a steady recovery. May whatever she is going through comes to an end; and we get to see the starlet back on our TV screens in no time!

After Mosque Controversy, Saba Qamar’s ‘Qubool’ Is Getting All The Love On Its Release
Nestlé For Healthier Kids (N4HK) Essay Contest Winners Announced
To Top