Leaping over to the factual controversies in the current year related to Pakistan’s entertainment industry, Mohsin Abbas Haider’s chaotic relation with his wife Fatema Sohail has blown social platforms with a never-ending ruckus. Every now and then, the masses witness new haste in the devastating allegations, the husband-wife duo provides the turmoil with fiery proceedings.

Two months back, actor Mohsin Abbas Haider’s wife Fatema Sohail accused him of domestic abuse on social media. The post made on her official Facebook gathered severe attention and the demand for justice started. Recently, allegedly called out for having an affair with Mohsin Abbas Haider, Nazish Jahangir shared screenshots of the ugly messages on her Instagram story which she received from Fatema Sohail and it took the digital nation in a different dimension. 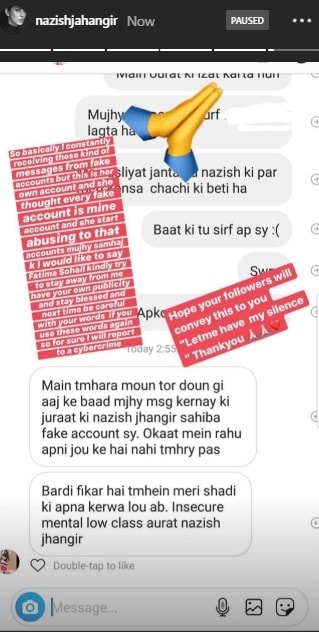 After being called ‘low-class aurat’ along with other hateful messages from Fatema Sohail in her Instagram inbox, Nazish Jahangir took a screenshot of the conversation, wrote her reply on it and posted that on her own story. Here’s how Nazish Jahangir responded, “So basically I constantly receiving these kind of messages from fake accounts but this is her own account and she thought every fake account is mine account and she start abusing to that accounts mujhy samhaj k.”

Further, she warned Fatema Sohail that if she received these type of messages again, cybercrime department will definitely be involved, “I would like to say Fatima Sohail kindly try to stay away from me have your own publicity and stay blessed and next time be careful with your words if you use these words again so for sure I will report to a cybercrime. Hope your followers will convey this to you ‘Letme have my silence’ Thankyou”

Later it was also revealed by Nazish Jahangir that not only her but Fatema Sohail has also been messaging her Instagram followers. A screenshot of the chat Nazish received from one of her followers was also shared online after the affected person reached out to her. According to the Instagram user ‘Ahmed’, at first Fatema Sohail messaged him but soon deleted it, then a different account named ‘Farha’ started messaging him regarding Nazish Jahangir.

Even after constantly specifying that ‘he’ is not Nazish, the messages kept pouring in! 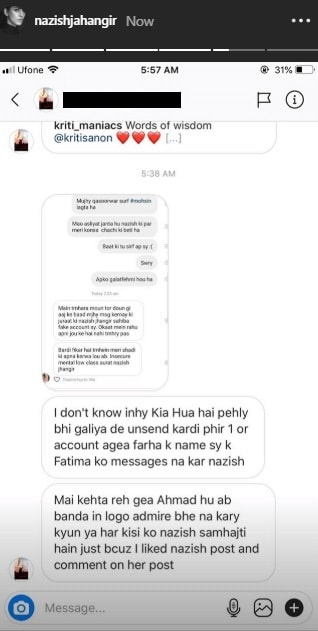 Day by day the case is getting complicated and nobody knows what’s about to come next. The sparking debate on social media regarding Mohsin Abbas Haider and Fatema Sohail’s deteriorated marriage also doesn’t seem to calm down. However, the turning of massive supporters in Fatema Sohail’s favor and Mohsin Abbas Haider getting fired from ‘Mazaaq Raat’ is making people wonder what will be the end of this heated feud.

Pakistan’s Fate To Be Decided In FATF Paris Meeting In October
‘Mahan’ Bharat India Ranks As 5th Most Dangerous Country For Tourists & Modi Sarkaar Is Winning!
To Top