Nazis Used Meth during WWII; the ISIS Might Be Using Cocaine 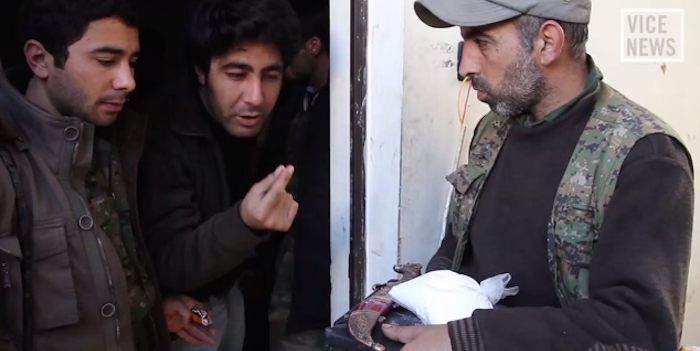 Al Qaeda was considered to be the most formidable extremist organization in the world, by the American. However, with the rise of ISIS/IS (Islamic State of Iraq and Syria) has emerged as a greater threat.  The notorious terrorist group ISIS has terrified and stunned the world with its vicious and barbaric tactics.

Presently, the ISIS continues with its lethal rampage and has the major portion of Iraq and Syria under its control. For the past couple of months, the United States of America along with its allies are fighting ISIS with continuous airstrikes.

ISIS still possess a great threat to the surrounding region.

The People’s Protection Unit (YPG), the Kurdish group has emerged to be one of the most active and fierce fighting forces standing against the ISIS. Recently, in a battle that took place in Kobane, Syria, the YPG managed to kill Emir Abu Zahra, the ISIS leader.

VICE obtained the exclusive footage of the items found at the house where Zahra was residing, by the help of Kurdish fighters involved.

The items found at his home included an expensive Dell laptop having a ballistic armor protection system, dagger (traditional Middle Eastern) and a big bag of Cocaine. Apparently Emir Abu Zahra was not using it; instead, he was giving it to the ISIS fighters.

If this stands true, it opposes many of the basic beliefs in Islam professed by ISIS. Under the Sharia law, it is illegal to consume, alcohol, drugs or any other addictive substance.

ISIS also released a propaganda video in which it burns down a marijuana farm.

Despite this, the Kurdish fighters reported finding the dead ISIS militants with syringes in their bags, vials and capsules in their mouths.

The drug use among the ISIS fighters can be affirmed by the fact that cocaine was found at the house of Emir Abu Zahra. This demonstrates the dual standards of the ISIS men who preach extremism yet they are getting high as they murder people.

To be precise, the ISIS is also hypocritical.

ISIS is hardly the first extremist group to use drugs to fuel its soldiers during the battle. As a matter of fact, ISIS is apparently following the footsteps of Nazis.

During World War II, the Nazi soldiers were very given Meth. At the start of the war, the Nazis spread across the terror within a short period of time. This tactic has often been attributed to “blitzkrieg,” or lightning war which is a military tactic to create psychological shock and resulting disorganization in enemies by employing speed, shock and superiority in the material.

In this regard, ISIS offers an interesting parallel to Nazi Germany. Debatably, it has fought in a similar style by utilizing shock and surprise to its benefit and also by attacking enemies with quick speed.

For instance, when ISIS attacked the city of Mosul, the Iraqi soldiers dropped their weapons and ran away from their posts.

Additionally, ISIS and Nazis share similarities when it comes to the use of drugs in battles. Reportedly, the Nazi soldiers used crystal meth to overcome fatigue during World War II. They called it Pervitin, an aid for alertness for maintaining wakefulness.

All this was revealed in the letters written by Heinrich Boll, a Nobel Prize Winner German Author when he participated in WWII as a soldier. He wrote home and asked for more Pervitin to be sent to him.

The patterns of ISIS and Nazis’ use of the drug during the battle are the same; however, we can hope that the menacing ambitions and indefensible tactics of ISIS will result in its demise.

HIV Injections Can Reduce Cancer: Marshall Jensen’s Story Proves It.
Why Do I Love My Pakistan? It’s Simpler Than You Think.
To Top