Nawaz Sharif Gets 2-Month Bail From IHC On Medical Grounds!

The Islamabad High Court, today, has decided to grant Ex-PM Nawaz Sharif a sentence suspension bail for 8 weeks. The case pertaining to the sentence’s suspension is the Al-Azizia case.

The news comes as a source of rejuvenation and celebration for PML-N supporters across the country. However, as of now, Nawaz Sharif’s condition is far from stable.

The plea for Nawaz Sharif’s bail had been filed by his younger brother Shahbaz Sharif. Additionally, the court demanded two bonds of Rs. 2 million each in return for Nawaz’s short-term freedom.

In the same decision, the court further said that if Nawaz needed a longer break, a petition should be filed with the government. Currently, Nawaz has been granted bail in both Al-Azizia and Chaudhry Sugar Mills cases.

The decision was given forth by Justice Aamir Farooq and Justice Mohsin Kayani of the Islamabad High Court.

What happened in the hearing?

The court gave Nawaz Sharif’s counsel 4 options. However, the court first asked about the President of Pakistan granting amnesty to the Ex-PM. To this, Nawaz’s counsel Khwaja Haris said the government was anti-Nawaz and would not do so.

To this, Justice Kayani said: “The prime minister and chief minister do not belong to a party. They belong to the entire country and province.” 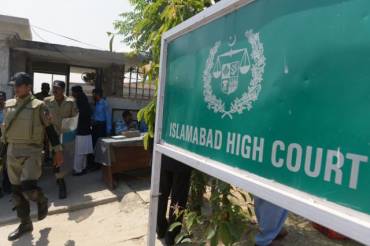 The second option, which was chosen later, was to suspend the sentence temporarily. The third option was also taken into consideration which revolved around accepting the applicant’s plea.

The fourth option, which referred to the rejection of bail, was avoided by the honorable court. Khwaja Haris further informed the court that even on Monday night, Nawaz Sharif’s health deteriorated after dinner.

Currently, Nawaz Sharif’s condition remains complex. However, the 8-week bail granted to him (temporary suspension of the sentence) should allow Nawaz Sharif to get the best doctors available, as per his choice.

This, in order, has served as the reason that the government has openly accepted the court’s decision of Nawaz Sharif’s bail in the Al-Azizia case. Nawaz Sharif, during his time under NAB custody, has suffered a mild heart-attack and constant fall in the number of platelets in his blood.

Only time will tell if the Ex-PM will survive what is being called the ‘worst condition of his life’.