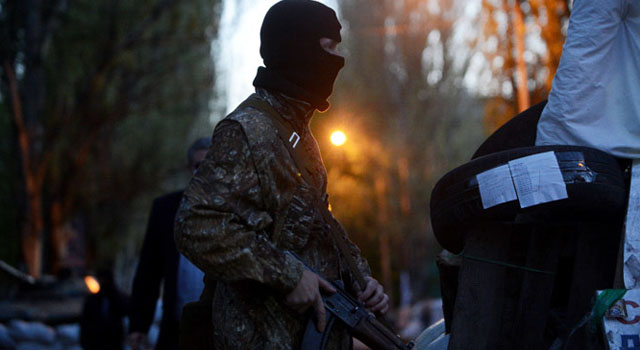 The Slavyansk self-defense forces will not immediately release the foreign military observers whom they detained Friday. At the moment the militia considers the officers NATO spies.

As the militia refused let the detainees leave, Russia said it will make every effort to ensure the release of the foreign experts.

â€œWe believe that those people should be released as soon as possible,â€ said Russiaâ€™s envoy to the Organization of Security and Cooperation in Europe (OSCE), Andrey Kelin. â€œJust like all other members of the organization, we are concerned with the developments.â€

â€œTheir detention would not help with defusing the tension on the ground and deescalating the conflict,â€ he added.

The group of eight foreign military observers and four Ukrainian military guides was touring eastern Ukraine under the Vienna document of 2011, an international agreement that regulates inspections of military objects by members of the OSCE.

They were detained by the Slavyansk militia as they were moving around the city in a bus. Initially the group was reported to be a civilian OSCE observer mission by the media, and it took several hours for the organization to establish that they were in fact military observers.

The protesters said they detained acting and former officers from Denmark, Poland, Germany, Bulgaria and the Czech Republic in the mission. They said the officers, who were accompanied by a member of the Ukrainian general staff, had maps of Slavyansk with checkpoints and barricades marked which proved that the officers were gathering intelligence on the cityâ€™s defenses. With the preponderance of officers from NATO member countries, the group were branded â€œNATO spiesâ€ by the militia.

A three-member civilian OSCE mission is expected to arrive in Slavyansk on Saturday.

Earlier, the Slavyansk self-defense forces detained a number of people, including journalists, suspecting that they could be gathering information for the Ukrainian authorities or for the radical nationalists from the Right Sector movement.

The suspicious attitude towards visitors is understandable, considering a number of fatal gun attacks on militia-held checkpoints the city witnessed in the past few days. Some of the attacks were carried out by Ukrainian troops acting in an ongoing â€œanti-terrorist operationâ€ against Slavyansk. The perpetrators of some of the others remain unidentified, with the protesters laying the blame on Right Sector activists