'I Have Been Scammed': Nadia Hussain Warns Online Buyers After Her Experience With Scammers

Online shopping frauds is explosively growing nationwide, especially since the outbreak. A new version of online shopping has emerged, where the scammers pretend to be legitimate online sellers. They do this either with fake social media accounts, websites, or a fake ad on a genuine retailer site.

A recent fraud is exposed by supermodel Nadia Hussain. The renowned model turned entrepreneur took her experience to her Instagram. 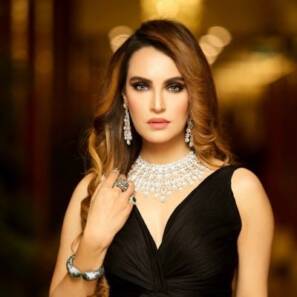 Nadia Hussain received a parcel from a courier company. She, however, clarifies that she does not blame the courier company for this fraud, as they clearly have nothing to do with it.

So basically, she received a parcel from a guy who had no uniform of the aforementioned courier company. Moreover, he did not even have any courier box on his bike. Before she could stop the guy to confront, he had already ridden away.

See what Nadia Hussain has to say about it

. . . ONLINE PARCEL DELIVERY SCAM!!. . . Pls pls be vigilant of parcel seller and sender information BEFORE paying for your parcel!!!. . . I received this parcel today with my name hand written on the flyer and since I shop very regularly online it didn't occur to me that this could be a SCAM and so I stupidly paid RS 4250 for an item I never ordered!!!!!. . . I AM NOT HOLDING THE COURIER COMPANY RESPONSIBLE!!!. . . These are ppl who are using courier company flyers and boxes and delivering absolute crap!!!. . . THIS HAS HAPPENED TO ME TODAY!!!. . . IT CAN HAPPEN TO YOU TOMORROW!!!!. . . I only wanted to warn all of you!!!. . . @callcourier @tcscouriers @dhlexpresspakistan @fedex

Upon unpacking the parcel, what Nadia found was absolutely enraging. The package had another packaging inside which had double wrapping on it. It contained, as quoted by the supermodel, ‘dirty, soiled, and used’ kid’s blanket.

It goes without saying that she had not ordered that blanket. In addition to this, at first, she thought that her kids might have ordered something like this. Hence, she called them to ask if they had ordered any such thing. Apparently, nobody from her house had placed an order for what got delivered to her place.

She shares about how it finally occurred to her that, this is nothing but, evidently, a scam. Furthermore, she talks about how ‘stupidly’ she paid Rs 4250 for an item she did not even order in the first place.

To prove the incident, Nadia Hussain also shares a CCTV footage of the rider at the end of the video she shared on her Instagram. She clarifies that she does not hold the courier company responsible for this as the scammers use courier company flyers and boxes to carry out their scams.

Additionally, she warns everyone who frequently shops online to be vigilant when placing orders online. She advises all her followers to always check the seller or sender’s information on the parcel before paying for it.

Incidences of online shopping scams have increased manifold in the last few years. Be sure to protect your banking and credit card details when purchasing online. Even if you are a COD person, make sure to check the seller’s information before paying for it.

Nadia has been in the headlines recently. She was earlier also seen schooling her fans on Instagram.

Indian Man Arrested For Abusing Cow – CCTV Footage Confirmed Assault At A Dairy
Why Is It Better To Marry At A Young Age? Here Are Some Pakistanis With Amazing Answers
To Top