NAB Just Arrested Asif Zardari After IHC Rejected His Bail Plea and The Game Of Corruption Is OVER!

All eyes on Pakistani politicians these days as the verdicts have started coming in. Former disqualified Prime Minister of Pakistan Nawaz Sharif is in Koth Lakhpat jail currently after he was found guilty of corruption cases and Former President of Pakistan Asif Ali Zardari and his sister Faryal Talpur were seen appearing in courts from last few months as they are accused of having fake accounts and unknown money trail. However, both Pakistan Muslim League Nawaz (PMLN) and Pakistan Peoples Party (PPP) leaders are now in the law-cage but their supporters are still backing them.

IHC rejects Zardari’s bail plea and NAB has issued arrest warrants against him!

Previously, Asif Ali Zardari had submitted an application to extend his and his sister Faryal Talpur’s pre-arrest bails but the Islamabad High Court rejected it while both siblings had left the court premises before the verdict was given. As the National Accountability Bureau (NAB) has been looking over the case since the start, it has now issued an arrest warrant for the Ex-President while his sister’s arrest warrant has not been issued yet. 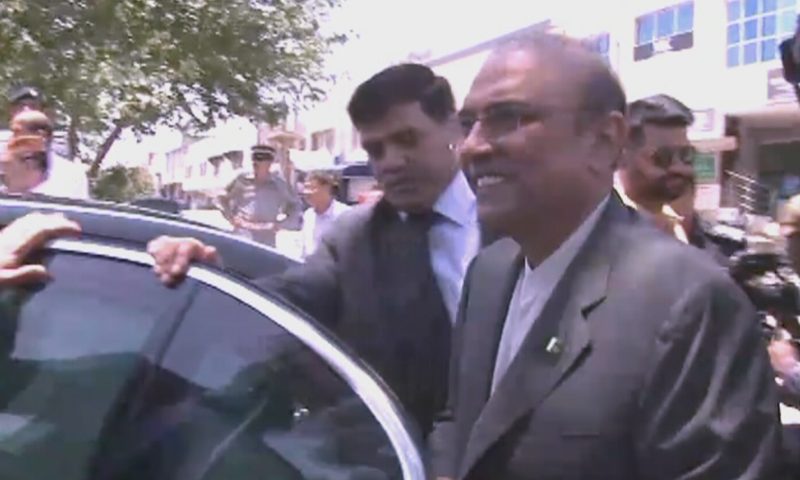 Pakistan Peoples Party (PPP) has called an emergency meeting following their Co-Chairman Asif Ali Zardari and his sister’s arrest. The latest news is that NAB has reached Zardari House, Islamabad to arrest Asif Ali Zardari and it looks like the game is over for him. According to sources, NAB team has entered the Zardari House and his daughter Aseefa Ali Bhutto is also present there. It has currently become the trending hashtag on Twitter and Pakistanis are praising NAB’s efforts. Check out the reactions below!

This guy beautifully slammed PPP by quoting Sherry Rehman’s tweet from 6 years back!

Why stand with Zardari when NAB hai sb pe bhaari!

Here comes the support of Jiyalas!

PPP supporters started threatening the Pak Fauj. What else can one expect from them?

#WeStandWithNAB should become the #1 trend now!

Finally, Asif Ali Zardari has been arrested by the NAB and Pakistani awaam is expecting it to be fully over for him. Let’s just hope that the country’s situation remain stabled and the economic conditions get better.