Hundreds, including Muslims, were gathered at the Dallas-Fort Worth International Airport to protest against the Muslim ban that is introduced by the new President of the United States, Donald Trump.

The agenda behind prohibiting Muslims from entering the United States is to counter terrorism and extremism that is a taking a toll on many countries globally. President Trump believes banning Muslims would scrutinize extremists and keep the U.S clean from such hazards.

The decision is not impartial. It holds a bias, a racial ground, and conflicts with the stance of many people especially Muslims in America.

During the protest, they did not hesitate to offer the obligatory Asr prayers. It was a defining moment as the Muslims engaged in support took the leap of offering the prayers. 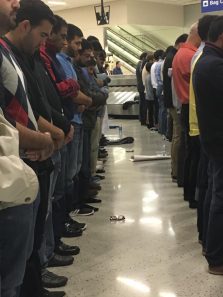 The prayer was led by Imam Nick Pelletier and garnered open support from the interfaith people present at the airport.

The more you suppress a thing, the more it emerges. The notion sets right here. 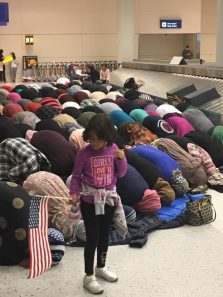 This is what democracy is all about. It remains impartial on all grounds and allows everyone the right to practice what they believe in.

Other people that witnessed and showed support to the Muslims offering prayers set a remarkable example. They assert that Americans or America is not based on the ideology on scrutinizing a particular community while disrupting the emotions and agendas of its own people. 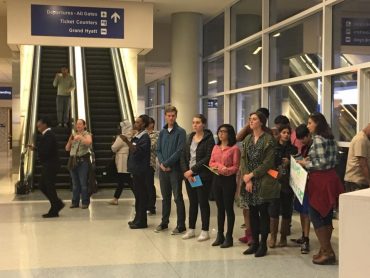 It shows how different many Americans continue to think and believe despite their leadership. It reflects empathy and tolerance by American people who let the world have a chance to see it.

We as Muslims can also learn from them. Since Muslims in America are a minority and they can well comprehend what it feels like to be one that continues to harbor support from the majority. We are a majority in our own nation and we can learn from the other lot of majority about how they treat their minorities with tolerance and peace.