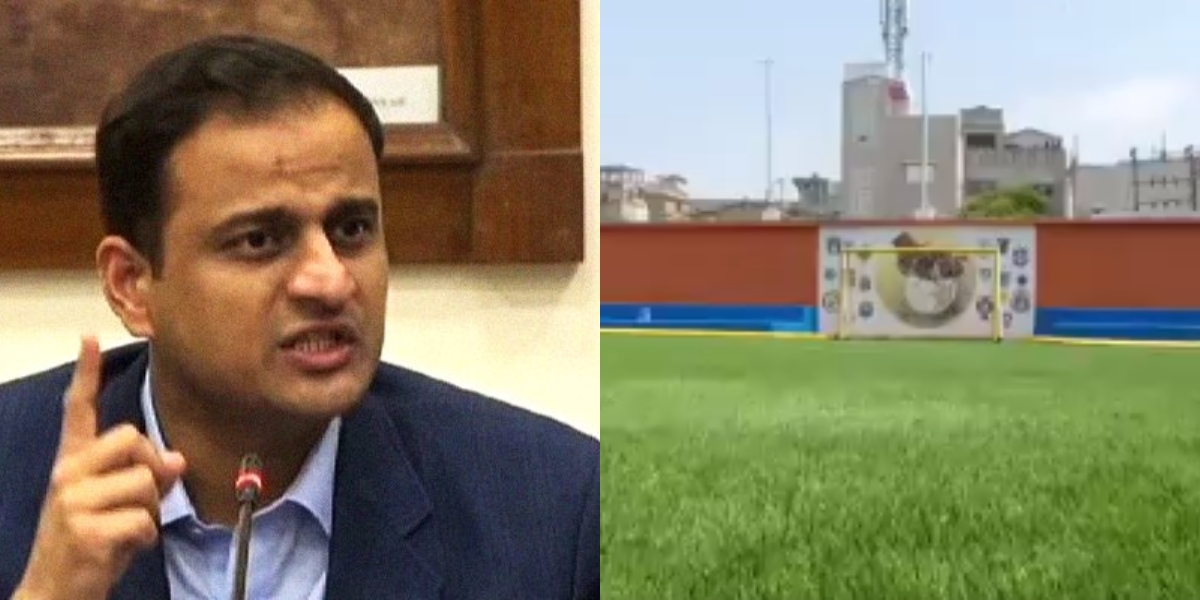 We all agree with the fact that plagiarism is unethical and it should be condemned. However, plagiarism of content is still prevalent around us. Every now and then we see such blatant incidents of plagiarism. From brands stealing other peoples’ precious work to artists fighting over copyright infringement with each other. Imitation is certainly not the sincerest form of flattery. When you’re putting someone else’s hard work as your own. Senator Murtaza Wahab recently claimed to have built a football ground by his party but there was more to it.

Political parties in Pakistan are infamous for taking sole credit for things that are actually a result of mutual or joint collaboration. It’s a pity that these parties don’t recognize the significance of giving credit where it is due.

The Pakistan People’s Party (PPP) leader recently posted a picture on Twitter. In the picture, he claimed that his party ‘established a beautiful football ground’. He asked people to guess where it was situated.

This is a beautiful football ground established through #PPP. Can anyone guess where it is? pic.twitter.com/YPSGSAButc

The football ground in Lyari was actually built and managed by private stakeholders by the name of Azfar Naqvi and Atia Naqvi in memory of their son. This was later explained by sports anchor Faizan Lakhani in his tweet.

Tweet of Murtaza Wahab on football ground was instantly noticed by many Pakistani social media users on Twitter. As a result, soon people started to educate the Spokesperson for the Sindh government in their own way.

SHAME on sindh government by taking credit of someone personal work .. SHAME SHAME SHAME!!!@azfarnaqvi16 is the person who is responsible for all this who made it possible in the honor of his late son. https://t.co/P3MayHrCsf

Lol, now PPP will take credit of a private club too, these guys who can't keep streets clean, allow the worst type of buses in name of public transport, just are not only stupid, they are pathological liars https://t.co/SKkEMuWrsg

Regarding my tweet earlier about the @CoachemadFA academy – I had mistaken the acronym PPP for the political party, instead of public private partnership. Have received clarity on what @murtazawahab1 meant. Appreciate the quick response. pls keep supporting @CoachemadFA

It was initially thought that with PPP, Senator Wahab’s political party meant Pakistan People’s Party. However, this is not the case. PPP also stands for Public-Private Partnership. This also makes everyone laud the smart choice of words by the lawmaker.

It is evident that Senator Wahab might have meant Public-Private Partnership (PPP) in his tweet. However, it is important to note that his tweet is also misleading as the stadium is a year old and his statement is hard to believe.

‘I’m Afraid, Hide Me’ – Palestinian Child Utters ‘Shahada’ As Israel Bombs Gaza For 10th Day In A Row
Aijaz Aslam Reveals How He Was Injured Recently While Shooting A Suicide Scene
To Top