Muniba Mazari has stormed the headlines for something that is outright uncomfortable for many of us. Why not? She stands as a big source of inspiration for all the right reasons. She is a writer, artist, social activist, philanthropist, and an inspiring mother.

Just recently, Muniba Mazari’s former husband filed a lawsuit against her. The news rapidly took over social media and caught everyone’s attention. Her former husband, Khurram Shahzad, is a former Pakistan Air Force pilot. He leveled a serious allegation on Muniba for blaming him for everything wrong in her life. Thus, he filed a lawsuit against her.

Muniba Mazari spoke up against her husband with the following tweet:

I don’t know how my story will end but nowhere in my text you’ll ever read ‘I gave up’!

In this regard, Pakistani people continue to show her their utmost support. It has been a major trend for days now and the developing story brings more updates. She further added and revealed more about the case, especially the character of her former husband with respect to the whole matter. Here is what she further mentioned on social media:

He allowed me to appear on TV for an interview for this condition that I’ll hide the facts about him! But when it happened more than once I parted ways, you’ll never find his name, his picture anywhere because he’s just nobody who wants nothing but money! Surely, greed is a curse. – Muniba Mazari 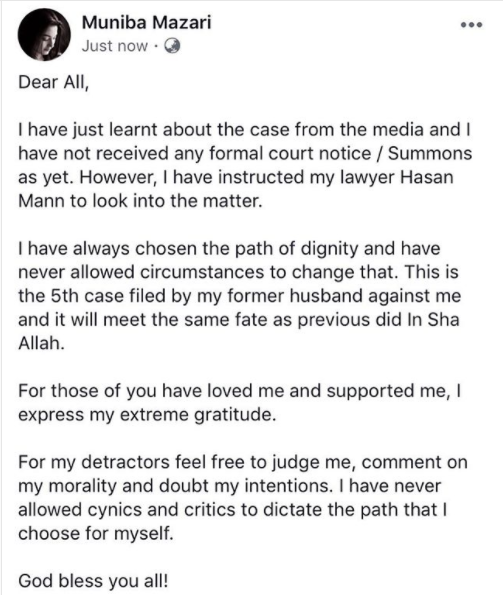 Shortly after it was posted on her Instagram, Pakistanis continued to show their love and support. She feels indebt of her supporters who have followed and loved her all along. They are outright supporting her in this case and she surely shares one alarming update.

What is your take on the whole matter? Share your views.