On Friday, the federal government announced that devotees can hold majalis and processions during Muharram if they strictly implement precautionary measures. 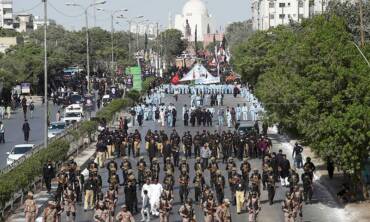 According to details, a meeting between President Dr. Arif Alvi and Shia ulema took place at Aiwan-e-Sadr. Both mulled over the issue of Muharram procession amid the deadly pandemic and made the decision.

Reportedly, the government has allowed Muharram processions to be carried out. However, it is only allowed on the condition of following strict coronavirus SOPs and guidelines.

Meanwhile, Minister for Religious Affairs Dr. Noor-ul-Haque Qadri in a statement said unanimously agreed SOPs have been formulated. These will be forwarded to provincial governments and Ulemas after the approval of the National Command and Operation Center (NCOC).

Besides social distancing in gatherings, the agreed SOP’s also include marking for sitting, no-entry without a mask, no use of carpet, chlorination of mats permitted to use outside Imam-bargah only, and brief and time-bound Majalis. 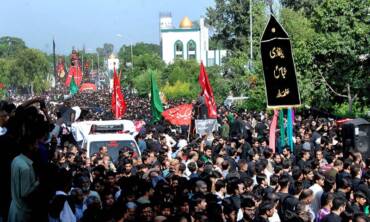 In addition to this, there is a ban on the participation of old-aged people, handshake or hugging, bringing along prayer mats, Sajda Gah, or beads. Not only this but they have also agreed upon the take-away of food instead of servings. Moreover, the mourners will not be allowed to touch Alam (flag), Taazia as well as the Shabih.

The mourning rituals of Muharram-ul-Haram would be allowed subject to the enforcement of SOPs. This includes hand sanitizers, face masks, single-use glasses for drinking water, a limited number of participants with restrictions on old-aged and ailing persons.

In the wake of the COVID-19 crisis, the president hailed the role of religious scholars in containing the spread of the novel virus during the month of Muharram.

Possibility of a surge in Covid-19 cases

A surge in COVID-19 cases because of Eid-ul-Adha and then Muharram is highly likely. The hospitals are to remain on high alert for the two months, from July 20 to September 20. During this time the staff leave is to be canceled. Moreover, the protests have been banned.

First the approaching crowding in makeshift cattle markets, plus the Eid-ul-Adha congregations. And then the Muharram processions in early September. In the wake of these events, an extraordinary surge can be anticipated.