Quarantine has been a period of weddings as well in Pakistan. From Sajal Ali and Ahad Raza Mir to Sarah Khan and Falak Shabbir, we have seen other celebs and common people tying the knots in simple ceremonies.

One such man from India recently contacted famous Mufti Tariq Masood. The poor man was so much disappointed with his wife that he had to seek help from the religious scholar. 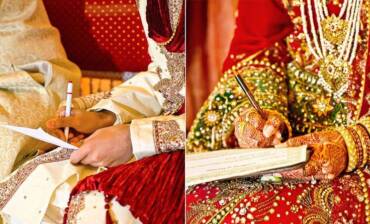 “I am tired of my wife because she fights with me a lot,” Javed Khan from Mumbai told Mufti Tariq Masood.

“I am married. It has been five years now and I have two kids. We do not live in a joint family. However, I am fed up with my wife.”

According to Khan, “My wife is good with everyone but me. She fights with me all the time over petty issues.”
At the end of his message, he sought help from the Pakistani religious scholar.

Islam gives a lot of respect and rights to wives. However, the Indian man’s problem stunned Mufti Tariq Masood for a moment and he took his time to collect himself before he replied to him.

“If you find a solution about this matter brother, kindly do also tell me,” requested Mufti Masood to the Indian man. LOL!

Mufti Masood is known for solving people’s issues in a very simple manner but this time, even he seems to be in dire need of help.

He continued addressing the man and said, “Even Google cannot help when it comes to controlling a wife. If you ever try to ask Google, either it will give you an error or it will say that research on this subject is being done.”

When his sarcasm was over (we believed so), Mufti Masood smiled and said, “One can tackle his wife only through love, but” he continued and added, “the last option should be to call the police, if she is listening at all.”

Police? Well, we hope Mufti Masood was joking about calling the cops.

This Girl Shares Her Experience Of Being Tested Positive For COVID-19!
Angry MNAs Of PML-N Declare PM Imran Khan As Better Leader Than Nawaz Sharif
To Top