Mufti Menk Savagely Roasts Reham Khan Over This Picture and My God, It is Funny! 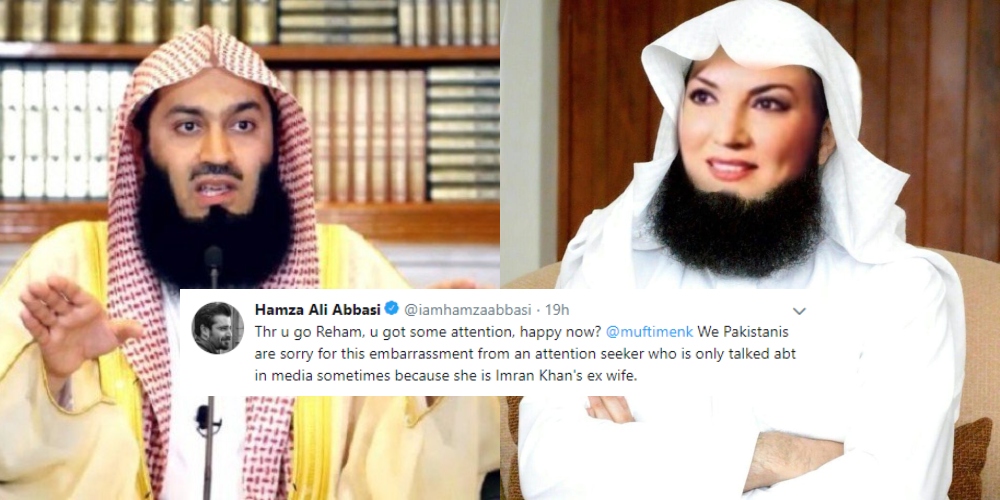 If you have been paying attention to the whole political scenario of Pakistan lately, then you must be well aware of what Reham Khan is up to. The former wife of Imran Khan continues to make headlines every now and then. She has been surrounded by a tidal wave of controversy, especially for her bitter resentment against her former husband and his political party. Not just that, her infamous and highly anticipated autobiography took a toll on people because it was based on content that would make everyone’s eyes go wide!

Recently, Imran Khan visited Baba Fariduddin’s shrine and was apparently seen kissing its doorstep. He was heavily criticised by the religious fraternity for such a gesture. Meanwhile, Reham Khan made sure to tweet this:

Farid, crush your ego, cut it Into pieces and only then can you have access to the treasures of God!
– Baba Farid

Wrestling with one's ego is the first step towards spiritual enlightenment. I hope political leaders realize this before visiting shrines. #Spirituality

Moving on, this woman has not really stopped. This time around she posted a picture of her with a beard and dressed up how religious men in Arab do.

There she goes again… You cannot, just cannot unsee this!

So a while ago I was offered to join a party. I said I might not be able to cover my face but I could grow a beard..looks rather fetching on me. pic.twitter.com/URXyfJc0jL

Obviously, Mufti Menk could not have let it go and decided to take a jab here…

“superimposed herself on to” oh Mufti Sahab, you are one funny maaaan.

I only noticed this "medical" humour because it was MY photo that the sister superimposed herself on to. I had no clue who she was until a few hours ago. So I responded with similar humour… lol

She explains by claiming that it is a photoshopped picture sent to her by some PTI supporters or members who are up to their crazy antics!

Dear PTI I am looking for someone to edit my Book cover….wanna help? 😉 https://t.co/VMcHnal2ZY

Reham expresses how she is a huge fan of Mufti Menk and follows his preachings.

I am grateful to the political party who photoshopped my picture & I get a comment from you sir. I am a huge admirer of your gentle preaching style. Please pray for Pakistan. We are going through a very difficult phase. https://t.co/0wasmnp8ip

She went on saying how she would not be disrespecting the Mufti by doing something like this by herself.

No. I would never dream of doing this. I am currently facing cyber bullying by a political party and they photo shop my pics to abuse & threaten me on a regular basis. https://t.co/2nI0HMoqxA

Reham says she is being abused and bullied by PTI supporters ever since she criticized Imran Khan over his visit to the shrine.

A political leader was caught doing a sajda ( prostrating )at a holy shrine. I pointed out that it is wrong as we must only do sajda towards the Qibla. Since then the abuse has gone up a level. I can only smile in response. May Allah forgive them. https://t.co/0wasmnp8ip

When you have survived what I have you learn to smile at these minor things. Also goes to show how one person is enough to fight their huge paid & connected team. https://t.co/WuYhhMTR1V

The likes of Reham Khan are making the whole political scenario of recent times more interesting. People are on a roll with their reactions, and yes, you may have guessed it right.

How can Hamza Ali Abbasi not sneak in to comment over the whole thing?

Thr u go Reham, u got some attention, happy now? @muftimenk We Pakistanis are sorry for this embarrassment from an attention seeker who is only talked abt in media sometimes because she is Imran Khan's ex wife. pic.twitter.com/QIil5nBqL2

Read Also: Reham Khan Gets Trolled For “Not Covering Her Head Properly” And It’s Ridiculous!