One of the most beautiful and scared institutions that bring two souls together and holds a high significance in Islam, is marriage. Sadly, in Pakistan, the patriarchal culture has diverted the true Islamic essence of a marriage of equal partnership based on mutual respect and trust, reducing it to a man-made standard that involves a submissive slave-wife and a dominant husband. This has left women in abusive marriages where their self-respect is constantly violated by the same man that is supposed to treat her as a ‘partner’ in life, but they slave away taking care of his every need including his entire family instead.

And to fan this disgusting culture where wives have no rights and standing of their own as an individual in a marriage further, Pakistan has ‘Rishta aunties’ like Mrs. Khan. A curious case of internalized sexism and misogyny that came out exposing her sick mentality on LIVE television where she blames her gender to be the main cause of divorce these days. Yes, according to Mrs. Khan women who cannot control their tongue, argue a lot and do not bow down to their husbands break their own marriages. 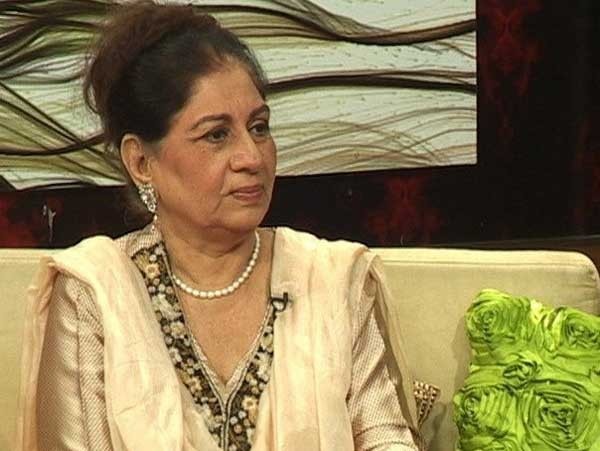 Well, hate to break it you Mrs. Khan but if anything women have finally started to speak up for themselves and do not tolerate disrespect and injustice at the hands of their husbands and inlaws which women of your time quietly took. No wonder you turned out this way.

Moreover, she continues to shout during the show saying that women need to control their tongues and that their exposure to media and what not have given them the audacity to talk back to their husbands. She continues saying how women should make sure that when their husbands come back, there clothes and shoes should be placed neatly. Apparently, these men are giant size babies that need to be taken care of and are incapable of doing the bare-minimum like sorting their clothes and shoes. Interesting!

Watch this nauseating clip at your own risk!

This has sparked outrage on social media excluding people that are infested with a misogynistic mentality and are having a field day!

The clip below shows how crazy this lady is. Her obsession with women being submissive slaves is borderline psychotic.

I don’t even get where they get it from. They pretend to be conservative but this is subcontinent Hindu culture probably. It’s not even religiously correct. Women can do no housework can demand money for breastfeeding and are under no obligation to serve the in laws.

This isn’t it, her moral compass is also broken considering quite a few people have come forward explaining their horrific experiences with Mrs. Khan who would try to match two families by hiding details from each other about one another.

Fantastic response to “Mrs. Khan” from @HBhurgri. Mrs. Khan is the marriage bureau owner who berated married women who speak out and won’t be household drudges.

Marriage is not about exploiting women for labor. https://t.co/oMObriI3Ij

So this Mrs Khan rishta woman goes around by the name Mrs Khan rather being called by her own name? I mean that’s her identity….”Mrs (i don’t have a name) Khan rishta aunty”??????….obviously she is a sad pathetic idiot full of shit.

Agree. The fact that these kinds of women are being given such a big platform to spew such out-dated misogynistic nonsense is something that needs to be corrected.

I get the outrage re #BardOfBlood but here’s the thing: it’s their media, they’ll show what they want. It’s not their responsibility to cast us in favorable light. It’s ours.

But we have MrsKhan’s mindset beating down progressive voices holding media captive in stone age opera!

However, the times are changing with more awareness about the rights of spouses in Islam including perfect examples from the life of the Prophet Muhammad SAW that shows what an exemplary husband he was, helping his wives in chores, being playful, loving, kind and most importantly, consulting with them about the important decisions. Pakistan is taking slow and steady progressive steps where there is much awareness thanks to the same media that Mrs. Khan was blaming.

Hopefully, Pakistani men that are supporting Mrs. Khan on her stance of what a perfect wife is, would try to shed their years-long sexist upbringing or exposure and really try to understand the rights of a wife in Islam that clearly places her as their equal with both having certain obligations to each other, their married life will be blissful with a very happy wife. Marriage requires respect from both sides where they work as a team; loving, supporting and respecting each other.

We are sure you have something to say about this. Comment below and let us know!