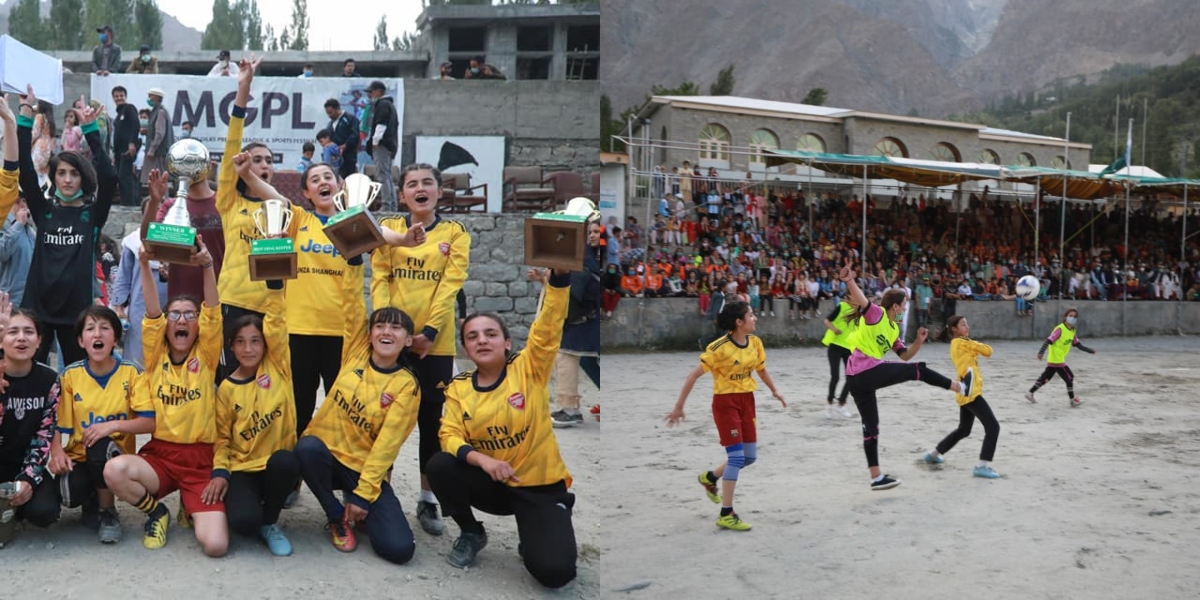 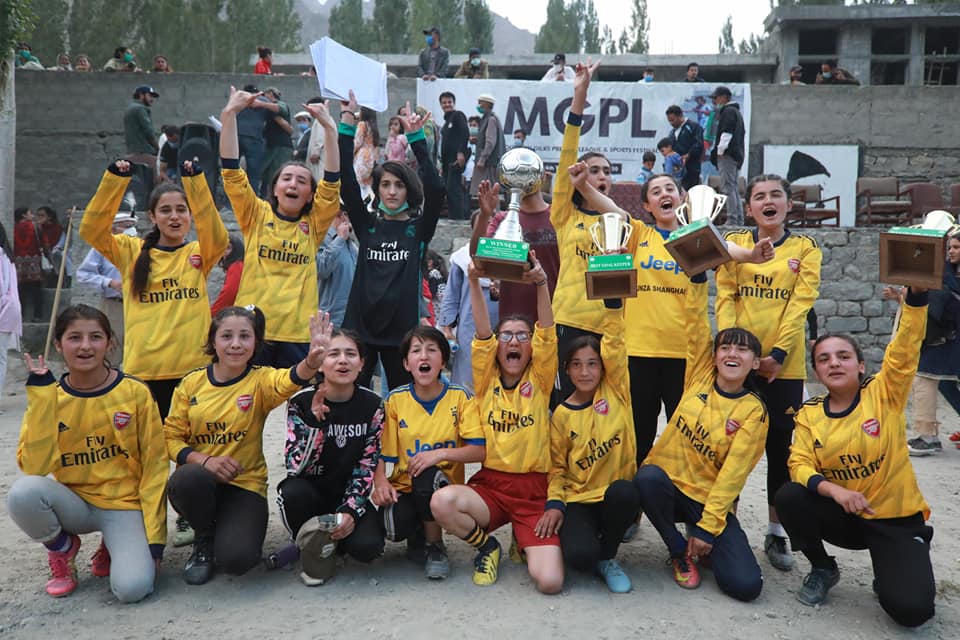 Chief Guest of the event was Mr. Kamil Jan, a social activist who belongs to Shishkat Gojal who on his speech said that he will always be supporting such healthy activities for women of his area. Presiding Guest of the final was Mr. Ghulam Tahir, Vice Chairman Rupani Foundation Hunza, who along with his team distributed masks to the crowd and participating teams and appreciated the girls for their achievements. Tournament sponsor was the tourism department Gilgit-Baltistan.

Pir Faraz Ali, a travel blogger from Hunza, shared the story about this sporting event initially. He shared the story on his Instagram and Twitter accounts where he provided details of the tournament. He also asked his followers to support this initiative and the mountain girls.

Normally, I don't make such posts but this one is special and I need you guys to help me as well. Last week, the first ever Mountain Girls Premiere League was organised in Gulmit, Pakistan, by Gulmit Young Stars Club & Students Welfare Organization in collaboration with Gilgit Baltistan Tourism Department. The tournament consisted of 10 teams from different villages of Hunza & Gojal. The final match of the tournament was held on 19th August 2020 between Gulmit Young Stars Club and Shah Talib FC and was won by Gulmit 2-0 Player of the series award was given to Ruqaya Farheen of Gulmit Young Stars. Bibi Asdaf of Gulmit Young Stars received Best Goalkeeper award for conceding only one goal in the tournament. Marvi Baig of Gulmit Young Stars secured player of the match award for scoring two goals in the final and 5 goals in the tournament. Throughout the tournament I saw immense talent & passion for football amongst the girls, specially the players from Gulmit. Playing a sport which requires a lot of stamina at an altitude of around 2500m is very challenging due to lack of oxygen. Unfortunately, there's not much encouragement and support for women in the field of sports, hence, I decided to make this post so that these talented girls get global recognition and get opportunities to pursue their passion for football professionally. I would like to request everyone who reads this to share this post on your stories and help them get recognition. I really hope some national or international organisation gets in touch with them and help/sponsor them to pursue their careers in football. Standing (left to right): 1. Heera Aziz (center midfielder) 2. Neha Aly (center midfielder) 3. Asdaf Aziz (goalkeeper) 4. Hina Khan (Left midfielder) 5. Karina (right striker) Sitting (left to right): 1. Ruqaya (center midfielder) 2. Zakia (goalkeeper) 3. Marvi Baig (left striker) 4. Fariya (center defender) 5. Rania (Right defender) Missing in the photo is Afsana Bakir (Right Defender) @arsenalwfc @arsenal @arsenal_foundation @barclaysfawsl @kimlittle1990 @daniellevddonk @bethmead_ @viviannemiedema @liawaelti @lisaevans_17 @jordannobbs @leahwilliamsonn @katie_mccabe11 @lydsaussie13

“Throughout the tournament, I saw immense talent and passion for football amongst the girls, especially the players from Gulmit. Playing a sport that requires a lot of stamina at an altitude of around 2500m is very challenging due to lack of oxygen,” he said in his post.

He added, “Unfortunately, there’s not much encouragement and support for women in the field of sports, hence, I decided to make this post so that these talented girls get global recognition and get opportunities to pursue their passion for football professionally.”

And, it worked! The story got so much recognition that even FIFA Women’s World Cup Twitter handle shared it with the world.

Ali Khan Tareen, son of Jahangir Khan Tareen and co-owner of PSL franchise Multan Sultans, also appreciated this tournament. He retweeted the highlights of the tournaments on his official Twitter account.

Pakistani female athletes are making the nation proud already. However, this Pakistani women’s football team from Gulmit has shown that it is an epitome of confidence, self-belief, and determination.

Every woman in Pakistan can take them as an inspiration for following their dreams. These young, energetic and enthusiastic individuals prove it to the world that women too can do whatever they want to once they put their mind to it, irrespective of any of the hurdles that might come their way.