The whole of the world is locked down due to the lethal pandemic of COVID-19. Following this, people across the globe are doing extra-ordinary things, such as gardening, singing at homes, household chores, reading and many more. However, do you know what does a monkey does during a lockdown?

Well, a viral video for the capital of India, Delhi, depicts a monkey flying a kite. Hillarious, isn’t it? The monkey in full swing flying a kite on. People are yelling towards it to whom the monkey is not responding. 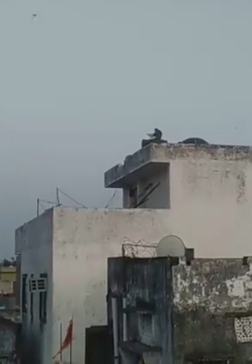 The 12-second video exhibits a monkey seated on the verge of a terrace and flying a kite with the ultimate comfort. Moreover, the beautiful thing about the video is nobody harming the monkey rather appreciating him, unlike those who brutally kill animals.

Soon after the video was shared on Twitter, it became a success and earned hundreds of retweets and likes.

Evolution happening fast due to lockdown😂

Monkey flying a kite. Yes it’s a monkey for sure😁 pic.twitter.com/6W8MtpPK43

While Monkeys are flying kites, humans are in the caves.

I am waiting for butterflies to sit on my hand to mark the end of corona.

When we all are locked out in home, this people are enjoying the nature 👏

Yet to be known

Where did he get a Kite from? Did he go to the local Target to purchase the kite

😂Monkey developed new skills, quarantine. 👌
Watching and learning, due to the large number of people unable to increase his newly acquired skills, quarantine gave him valuable time to do.👏 pic.twitter.com/bgc0IMzhpP

lol….the monkey just got hold of a string of a kite that was cut off during some kite fight, that’s it. (that’s the best I can explain in English )

Please! the monkey is not “flying” the kite, he only is taking the thread. I do admire the evolutionist, trying to fix it to all animals and its behavior, great faith is need for it.

As per Darwin, the evolution of humans occurred from the apes (monkeys). The diminutive animal is now a step further in becoming a human being. The video depicts that monkeys are successfully following the trajectory of humans. The viral video on twitter brought smiles on the faces of people amid the extended lockdown.

WATCH: Pakistani Woman Schools Man Who Harassed Her On Street
The New #MeAt20 Fever Is Going Crazy on Social Media
To Top