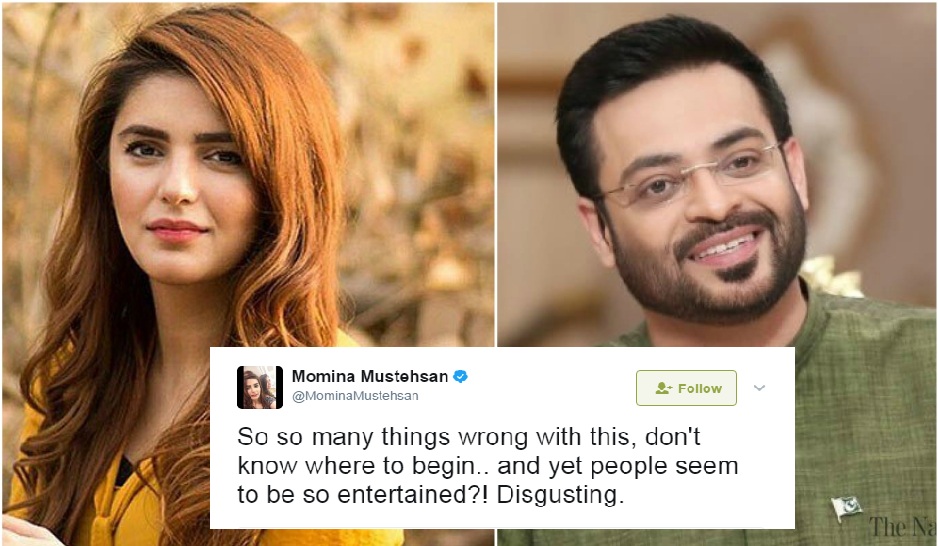 This year is surely not meant for Amir Liaquat. Seems like, he’ll be roasted till the end. LOL. Amir Liaqat has not been up to any good during Ramadan. And, one after the other, he has been in the news for all the wrong reasons. Too bad for him, some people just don’t learn. This time, he was bashed by Momina Mustehsan!

As much as he has entertained us with all his sasti comedy and debates, Amir has failed to retain his image in front of his ‘audience’ and the public, and it all went down too quickly. Only Amir would know the real struggle! HAHA!

He recently invited Meera Ji, on his show “Game Show Aisay Chalay Ga” on Bol TV, and the encounter became quite notorious for which the audience hated him and bashed him with ferocious comments.  Even a few celebrities spoke up against his despicable behavior.

So so many things wrong with this, don't know where to begin.. and yet people seem to be so entertained?! Disgusting. https://t.co/L3uUsSTE7k

and.. Momina wasn’t the only one. Here’s what Sharmeen Obaid Chinoy tweeted…

For those who missed out on the whole scenario, here’s what happened…

The video clearly shows the way Amir Liaquat interrogated her, was merely awful and disrespectful and Meera wasn’t enjoying it AT ALL. She was in a tight position which was pretty obvious that she was being forced to answer all the wahiyaat questions. It was a live show, what else could she have done?

We just can’t seem to absorb how just for the sake of TRP, these celebrities who’re currently hosting Ramadan transmissions can stoop to the lowest level. And, we all know very well who tops the list. Every. Single. Time. He’s indeed a disgrace to Pakistan.

Want to make smarter choices in life? We request you all to stop watching such shows, where the sole meaning of calling a guest is to defame them or to disrespect them. We should stop giving them the much-needed hype they seek from the audience so just for the sake of TRP.

The celebrities are on a roll, and we’re loving every bit of it!

Pakistani Celebrities Are Keeping Edhi’s Legacy Alive This Amazing Way and We’re So Proud!
Some Karachiite Seemingly Lost It Because They Brought a Lioness out On Roads and Got Arrested
To Top