The nation grows stronger and better with time, but Pakistan seems to be moving the opposite way, only because of all of us. The women of this state are still deprived of their basic rights because of the stereotypical thoughts. They are still considered a curse, a burden and unequal of men. And the sad part is, if someone talks about it, they are labeled as feminist. But despite all these issues, Pakistani women keep on breaking barriers and making us proud around the world; while they are not even being recognized. Many people, since the past few years, have started to address this issue including celebrities like Momina Mustehsan.

How sad. You'd only keep your women confined at home if you're one of those who harass and disrespect other women and make them unsafe. https://t.co/bZIxTD5XSi

In the least time, Momina has achieved a lot in this industry. Including her recent milestone when she was featured in BBC’s Top 100 Women. A year ago, she did an advertisement for Sprite in which she was playing football. In response to it, a Pakistani squash player, Noorena Shams, complained that it would have been better if the ad featured a real women athlete instead of a celebrity.

TRUTH HAS BEEN SPOKEN 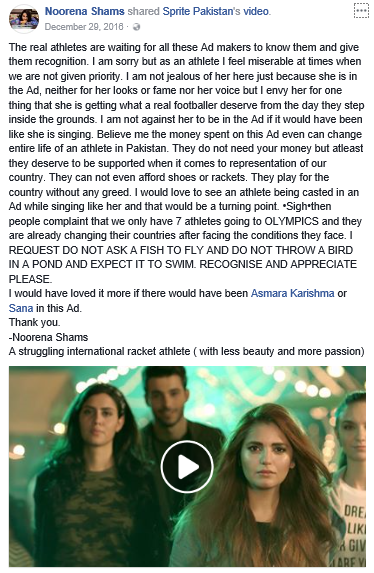 Momina couldn’t agree more on what the athlete said and told the organizers that she would only do the gig if Hajra Khan, who is the captain of Pakistan’s national football team, was brought on board. Recently, Momina Mustehsan was approached by BBC to talk about how she helped women to continue their journey of sports. She discussed how special Islamabad United is for her as it supports women to be in sports, unlike any other team.

The interview came out to be a special response for Noorena Shams about the issue that she raised 10 months ago. She being thankful to Momina Mustehsan and the media, put up a status on Facebook to appreciate them for shedding light on such an issue. As there are many things that a women athlete in Pakistan has to go through, no one seems to address it in an effective way.

FINALLY, AN ISSUE REGARDING FEMALE ATHLETES HAVE BEEN ADDRESSED PROPERLY 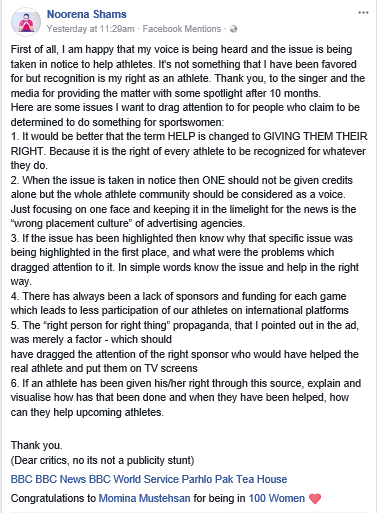 All power to the girls of this state who are doing way more than a man can do. Be thankful and supportive of every single woman because no struggle can ever succeed without women participating side by side with men as said by Quaid-e-Azam.

People are Claiming that the Doctor Accused by SOC has a History of Harassment
Pakistan Just Created a New Game That Might be more Addictive Than Candy Crush!
To Top