It seems the priorities in love are completely different for this town girl. Momina who only wishes to ride in AC cars was finally called out on her behavior on twitter.

We all know materialistic people around us, but this girl has taken upon herself to claim the spotlight in the race.

If you still don’t know who Momina is, she is the girl who valued AC cars over time spent with a loved one.

For those who are still wondering who Momina is, check out this thread; 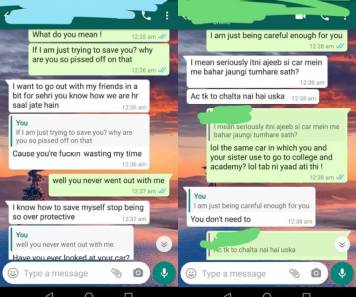 Since these screenshots came to light, Twitterati have meme-d the tea out of this Momina girl, pitying her over such shallow behavior.

Momina jani what is this behaviour? #momina pic.twitter.com/4VdffECWH2

#momina
She is not gold digger
She just wants to repair the car AC of her boyfriend pic.twitter.com/Jt5wT8AIrO

The person who posted the screenshots has chosen to stay anonymous and while Momina herself hasn’t come out to defend herself we only have only side of the story to go on. Nevertheless Twitterati has declared which side they are on and all we have to say is ‘What is this behavior Momina‘!

Hey all Mominas, what do you think of this story? Let us know in the comments section below.

Virtual COVID-19 Fund Raiser: Famous Pakistani Artists To Perform In The Event
Adnan Siddiqui Making Fun Of Sarfaraz’s Speech Is Wrong On So Many Levels
To Top