'I Often Write Moin's Name In My Scripts, Then I Cut It', Anwar Maqsood

As the global pandemic has forced everyone to stay indoors, live celebrity sessions have become a new trend. Famous personalities around the world are interacting with their fans and followers through their social platforms these days.

Among others, Pakistan’s legendary artist Anwar Maqsood has also teamed up with his rockstar son Bilal to go online. In a previous session, Anwar Maqsood’s witty take on why he stopped writing for TV went viral and people loved it. However, this time, Maqsood Sahab is back with more life-changing quotes and to reminisce over past memories with his best friend.

In a recent Instagram live session hosted by Bilal, Anwar Maqsood discussed several different aspects of life. From recalling his time as an investment banker to becoming inseparable from the iconic Moin Akhtar, everything was revealed. Consisting of 10 questions, the session was going fine until Anwar Maqsood was asked about his Loose Talk buddy. 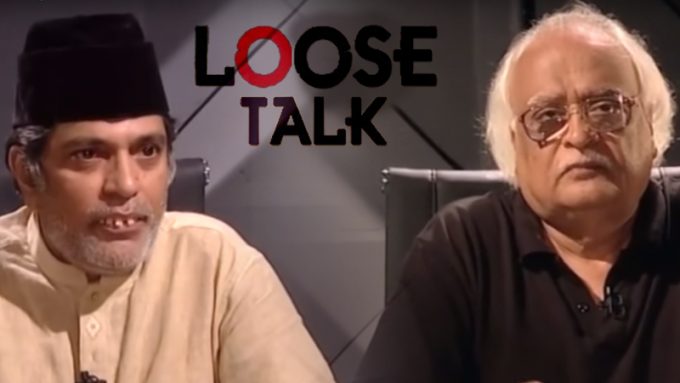 Remember the famous Loose Talk show? Well, during the session, Bilal asked a fan’s question from Anwar Maqsood, which was, ‘Do you miss Moin Akhtar?’ Just listening to this question, Anwar Maqsood’s got emotional and poured his heart out for the (late) artist. Expressing his love for the Akhtar, Maqsood shared how much he still misses his old pal.

Moin Akhtar will always stay in our hearts

Thank you for sending in your questions.

”Sometimes when I am writing something like Loose Talk, I write my name and instinctively start writing Moin’s”, he added. It is indeed unfortunate not just for Anwar Maqsood but for the whole nation to lose Moin Akhtar so soon. While talking about his companion, the sadness in Anwar Maqsood’s eyes was quite evident and heart-breaking.

Well, no matter what, legends like Moin Akhtar never die and they stay in the hearts forever. Apart from this, Anwar Maqsood’s hilarious and humorous writeups have always been the point of amusement for the masses. Speaking of which, some time back, the legend took a savage dig at former disqualified PM Nawaz Sharif in his hilarious poetry.

In Pictures: Aamir Liaquat’s Wife Tuba Getting More Limelight Than Him
‘Yes, I’m Sunni, He’s Shia And Our Son’s A Sushi,’ Says Unapologetic Blogger
To Top