Mohsin Abbas Haider's Wife Files For Divorce And This Might Finally Put An End To Their Marriage!

In recent times, where famous celebrities of Pakistan are seen being successful in finding their life partners, some are struggling to save their collapsing relationship. As digital technology has taken over the human place, it has become easier to get your voice heard to the masses be it something related to a well-known personality or the general public.

Called out as the most controversial issue of the current year, actor Mohsin Abbas Haider and his wife Fatema Sohail have sure mended their ways through. Earlier this year, Haider’s wife posted a status on her Facebook accusing her husband of domestic abuse and calling for help which now seems to be in its ending procedure. Recently, Fatema Sohail finally filed for divorce in a Lahore’s Family Court citing the reason being the abusive and aggressive attitude of Mohsin Abbas Haider towards her.

In the divorce application submitted by Fatema Sohail in a family court of Lahore, she stated that her husband Mohsin Abbas Haider is involved in an extramarital affair and that she doesn’t want to live with him anymore. Furthermore, she also told the court that she can’t bear with Haider’s physical abuse anymore and asked the court to accept her divorce plea.

In response to the news of the divorce, Mohsin Abbas Haider showed happiness over his wife’s decision. Taking to his official Facebook page, Haider posted a status regarding the divorce filed by his wife Fatema Sohail displaying relief and calling the marriage ‘toxic’. Further, he even accused hr wife of the same allegations, Fatema had put on him previously.

This is how Mohsin Abbas Haider responded after he received the news of the divorce! 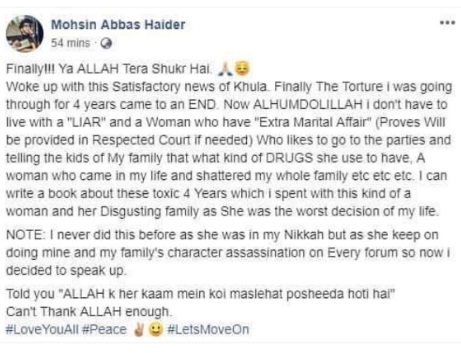 Earlier this year, Mohsin Abbas Haider faced allegations from his wife Fatema Sohail of torturing her physically and mentally. Later, a Pakistani model called Nazish Jahangir was also accused of having an affair with Moshin Abbas Haider by Fatema Sohail. After the involvement of the model in the issue caught fire, Nazish Jahangir replied to the allegations of affair and Haider himself also denied it.

Entertainment industry’s take on the matter!

Catching every eyeball on the matter, nearly whole of the media industry stood with Fatema Sohail backing every allegation she put on her husband. The Pakistani awaam also made hateful comments and threw severe criticism on Mohsin Abbas Haider while both the husband and wife in proving the other wrong, even held the Holy Quran in their hand during their specific presser.

Check out: After Mohsin Abbas, His Wife Too Pledges On Quran With Her Statement And They Should Avoid It!

Well, pledging on the Holy Quran in hand wasn’t appreciated by the general public and many social platforms even boycotted the couple. The confusion created brought some calm in the issue for some time but now it looks like the couple has finally thought of breaking the life long vows taken in their marriage.

The Alleged ATM Robber’s Father Cries Over Son’s Dead Body And Murderers Should Be Ashamed!
Clifton Beach Is Covered With Open-Needle Syringes Among Other Waste Putting Everyone In Danger!
To Top