The recent few months haven’t been kind to the Indian government. Since winning the elections with a clear majority, the BJP looked all set to rule with conviction. However, the ruling party of India and its prime minister Narendra Modi are under a lot of scrutiny for their recent actions. Both locally and globally. It’s like they are stuck in this constant phase of failures.

There is literally a list of blunders and the internet is filled with it. From the Nazi-like actions in Kashmir to losing this war in diplomacy against Pakistan. Modi was desperate to prove his worth to his loyal supporters. Well, the pressure got to him as we saw him tumble. Prompting a plethora of memes. The world was not kind to Mr. Modi.

Special mention of Modi’s fall before we proceed:

The recent citizenship amendment bill and the outrage it caused has put so much pressure on our famous chai wala here. And just like Modi, the Indian Government has come crumbling down under pressure. So much so that they had to resort to cheap Bollywood tactics to turn the tides in their favor.

We live in the age of technology. It is a time where everyone has a mobile phone, and nowadays, a phone is incomplete without a camera. We all know that even a child knows that. However, it seems like the police in Delhi does not know that.

As it happens that a policeman was captured spilling petrol on the seats of local buses; not knowing that there was someone outside recording them. The whole gimmick was, in fact, a ploy to put the blame on the protestors.

Closeup of Delhi Police pouring petrol inside the buses. They set these buses on fire and then falsely blamed Jamia students of violence and vandalism. #JamiaMilia pic.twitter.com/82tWKdoIV6

Well, this sudden shift in paradigm has indeed put the Modi government on the back foot. For the first time, we have seen this government under pressure. In an attempt to get a grip on the whole situation the Indian government tried to pull off a “Nayak” on the Indian people. And my word, how have they failed so miserably.

As soon as the video got viral people were once again reminded of this political thriller. “Nayak” is a Bollywood film that came back in the year 2001. It starred Anil Kapoor and Amrish Puri, and it was about the dark world of politics. The character of Amrish Puri is what we call a “cheap politician”. Just like Modi, in the film, he uses violence and lies to manipulate the sentiments of the people. Even their characters and mannerisms are so alike. 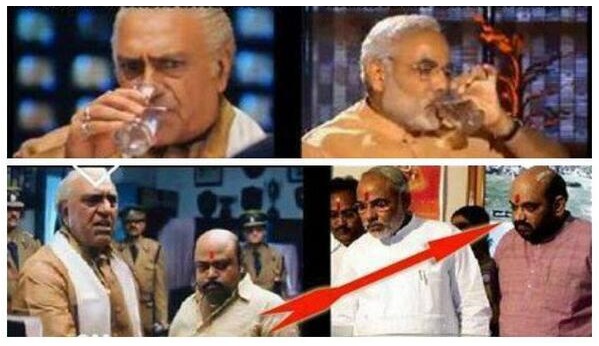 We all remember the movie, in the movie, there is chaos and political unrest almost throughout the country just like modern-day India. There is even a bus scene in the movie where the villain allows violence to happen just to save his vote bank. Modi too is trying to please his vote bank with the bill. The bill has literally caused violence throughout India. The movie was certainly ahead of its time, as it predicted the coming of Modi.