Ever since India came under the rule of Narendra Modi, the country is in dire straits. Presently, China has challenged India and disgraced its army. Reciprocally, Indian media has nothing to say except for some fake claims and Modi is silent. Consequently, people on social media trolling Modi and Indian Media.

On Monday night, Chinese soldiers killed at least 20 Indian soldiers in a skirmish at Galwan valley. Following this, the Modi regime released no official statement and said no words of empathy for Indian soldiers; neither stated line of action against China. Had it been Pakistan, the Indian ruling elites would have given thousand of statements; with their pseudo claim of surgical strikes.

Earlier, Indian forces found begging the Chinese army. In short, India is facing immense disgrace for the last few weeks. At one end, India showcases valor of their army in Bollywood movies, and in reality, their government is too afraid to even speak against China. Consequently, netizens of India are quite depressed and are depicting their anguish against Modi and Indian media. 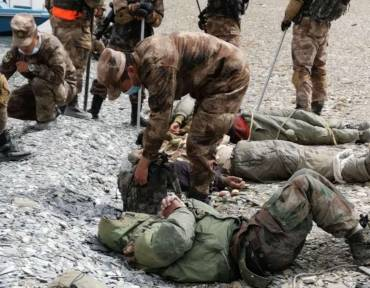 Although India media made a false claim of killing 43 Indian soldiers, it did not go well. As eminent Indian professor, Ashok swain trolled Indian media. He wrote on Twitter, “ANI has already killed 43 Chinese soldiers. Wait for a few days, ANI will also do a Surgical Strike and a Balakot!”

ANI has already killed 43 Chinese soldiers. Wait for a few days, ANI will also do a Surgical Strike and a Balakot!

This is how people on social media trolling Modi and Indian media.

If Indian soldiers have killed 35 Chinese soldiers, why Modi and his ministers are hiding? If he could celebrate killing a crow, what stops him now?

This is what Rahul Gandhi says:

Why is the PM silent?
Why is he hiding?

Enough is enough. We need to know what has happened.

How dare China kill our soldiers?
How dare they take our land?

Unless I missed it, Prime Minister Modi has not said one word publicly about the 20 Indian soldiers that lost their lives in the Galwan Valley. No statement, no address to the nation, and not even a tweet about it. This is monumentally surprising.

Modi to step down!

PM Modi now needs to address us as a nation about the #IndiaChinaFaceOff on the #GalwanValley and take responsibility for the loss of lives of the 20 brave #IndianArmy martyrs . This has been a terrible handling of lies and deflecting by PM Modi . He must own up or step down!

While most of Indian media is scared to speak truth to power, it is only @RahulGandhi ji who is speaking in defense of the country & for Indian Army!

Every volunteer of @IYC will stand behind our jawans & do our bit to question those in power.

#LadakhBorder India has killed 43 Chinese soldiers in Galwan just like it killed 350 terrorists in Balakot and shot Pakistan’s F16. Don’t ask for proof. Believe in ‘sources’ and wait for Bollywood movie. pic.twitter.com/5XThLfW38E

Above all, China has brought Indian forces on knees. The sharp tongue of Modi and his accomplices, which was once used against Pakistan, has become enervated to talk against China.

China’s Message To India – Both Troops ‘Clash On Border’ In Sikkim
Cleric Issues Fatwa Against Selling Plasma, Says It Is As Haram As Pork In Islam
To Top