Indian Prime Minister Narendra Modi on Wednesday launched the construction of a Hindu temple in the northern city of Ayodhya. He kicked off the Hindu temple construction on a locus where Babri Masjid was demolished nearly three decades ago to flicker a deadly riot nationwide.

Ayodhya is located in the Faizabad district of Uttar Pradesh. According to the epic Ramayana (a sacred Hindu book), many Hindus believe Ayodhya to be the birthplace of Lord Ram. In fact, the right-wing Hindu mob demolished the 16th-century Babri Masjid in 1992, claiming it to be built on the ruins of a temple for Lord Ram.

The nationwide religious riots triggered by it led to more than 2,000 people, mostly Muslims, getting killed. 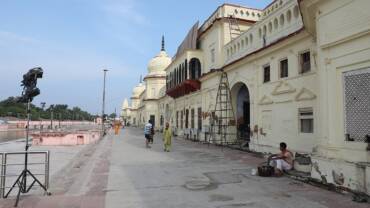 Ownership over the site has been claimed by Hindu and Muslim parties for decades. Last year, the never-ending decades-long legal battle was brought to an end. The Indian Supreme Court gave the contested site to Hindus petitioners. Moreover, the court also asked the government to provide Muslims with land within Ayodhya city at a prominent site to build a mosque.

Narendra Modi laid the foundation stone for a Hindu temple

Amid the deadly coronavirus pandemic, an inauguration of the temple had been scheduled for August 5. As it appears, Modi’s Hindu nationalist Bharatiya Janata Party (BJP) seems to have fulfilled a long-term promise to its core electorate. 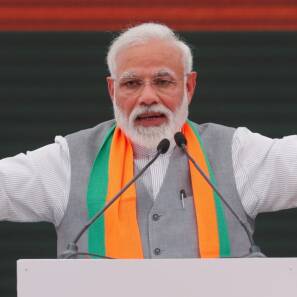 In addition to this, the launch of construction also marks the first anniversary of the crapping by Modi’s government of special privileges for India’s only Muslim-majority state of Jammu and Kashmir. This has raised another highly contentious issue for Muslims.

Many Muslims in Ayodhya have welcomed the construction of the temple. They are holding onto the hope that it would end years of acrimony with Hindus. Not only that but also helps bring economic growth. However, an influential Muslim group spoke out against it. 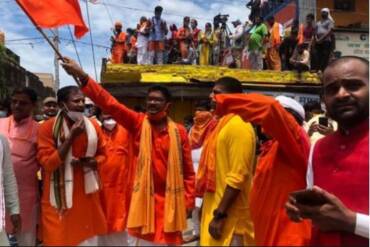 AIMIM leader Asaduddin Owaisi on Wednesday said the Babri Masjid incident will not be erased from Ayodhya’s legacy.

Prior to the launch of the construction of the temple, Modi took part in Hindu rituals. These included the chanting of Vedic mantras by saffron-clad priests to bless the site. The chant of prayers filled the air through the city, located about 687 km southeast of the capital New Delhi. The devotees and monks thronged its numerous ancient temples in celebration.

Twitterati reacts to the construction of Hindu temple

You built your #RamMandir on our dead bodies. Nothing will wash off the stains of blood from your hands. The law of the land should be ashamed for failing Muslims of this country. Posterity will name you as hateful fascist bigots.

People are calling out PM Modi for being an extremist

The fanatic act initiated in 1992, entered its final stage today by a group of fascist & racist extremists.

It marks the foundation of a fanatic Hindu Rashtra.

Babari was a Masjid & it'll remain a Masjid till the Sun rises from the East.#BabriZindaHai pic.twitter.com/8lLzgRDkMd

Not only are they enraged but also sad over the replacement!

No matter who they contract, no matter how much money they invest; they will NEVER be able to build a structure as beautiful, as majestic as The Babri Masjid. Whatever they build will be a proof of their deep inferiority complex. #BabriZindaHai pic.twitter.com/wcxRXciM22

The subject-matter has caused an uproar on social media. Activists are deploring the action taken by the Indian government with the trending hashtag #BabriZindaHai on Twitter.