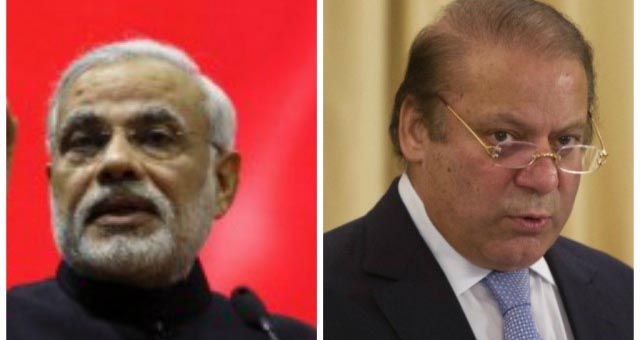 In his letter, Modi condemned theÂ brazen attackÂ on Karachi airport in which 37 people were killed including 10 terrorists. The all-night battle with militants, who besieged Karachi airportâ€™s old terminal, started on the night of June 8. It wasÂ the first large-scale terrorist attack at the countryâ€™s largest airport in years.

The Indian prime minister also offered his condolences to the families of the victims of the attack.

Modi also stated in his letter that he wants peace between the two countries.

The actual text of the letter can be read below:

I thank you for your letter of 2, June 2014 and the positive sentiments that you have expressed about your visit to India last month.

I was particularly delighted and honored by your participation in the ceremony for the swearing-in of the new government. Your presence and that of other leaders from our region not only added a special sheen to the event but also a celebration of the strength of democracy in our region and a reflection of our collective hopes and shared destinies.

I was also encouraged by our discussions on our bilateral relations and the convergence in our views, especially on the fact that a relationship between India and Pakistan defined by peace, friendship and cooperation would unleash enormous opportunities for our youth, secure a more prosperous future for our people and accelerate progress across our region. I look forward therefore to working closely with you and your Government in an atmosphere free from confrontation and violence in order to chart a new course in our bilateral relations.

I also take this opportunity to condemn in the strongest terms the terrorists attack in Karachi and convey my deepest condolences for the loss of innocent lives in this senseless and barbaric attack.

I thank you once again for the sari that you sent for my mother, a gesture that she has deeply appreciated.

Nawazâ€™s letter was sent to Indiaâ€™s foreign ministry last week through the Pakistan High Commission. He hadÂ written a letter to his new Indian counterpart to express satisfaction with their â€œmeaningfulâ€ first meeting.

â€œI look forward to working with you in harmony on all unsettled matters for the benefit of both nations,â€ he had written in the one-page letter. â€œI must say that I have returned much satisfied with our meaningful exchange of thoughts on matters of bilateral and regional interest.â€

Narendra Modi and Nawaz Sharif are expected to meet again in September on the sidelines of the UN General Assembly in New York. 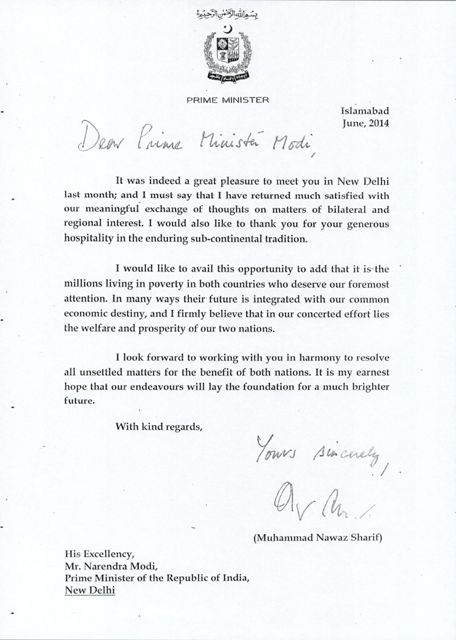