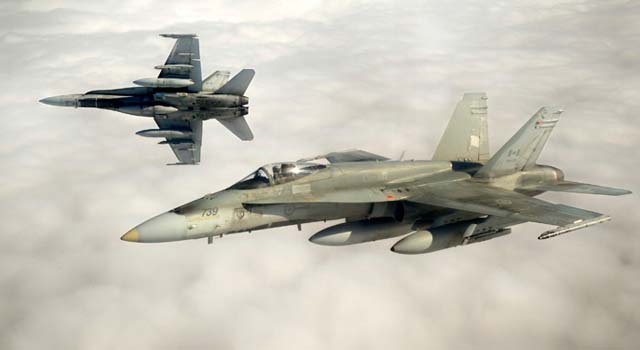 Six CF-18s and hundreds of Canadian Forces personnel left for Romania to help NATO forces in Eastern Europe amid uncertainty over the scope of the mission.

It is the biggest deployment of military aircraft to Romania from another NATO member since the Ukraine crisis broke out.

“There is a lot of uncertainty about what we’re going to be doing over there,” Lieutenant-General Yvan Blondin said at a press conference with Defense Minister Rob Nicholson in Bagotville, where the CF-18 Hornets are based.

Blondin mentioned that the troops were going to perhaps participate in routine training exercises â€“ but he is still not sure what the mission will involve.

“We’re not sure how long we’re going to be staying, but we’ll be staying until the government tells us it’s time to come back,” Blondin said.

The fighters first headed to Iceland before receiving further direction from Department of National Defense’s Central Command on where they will be stationed in Romania, which borders Ukraine.

All in all, up to 250 Canadian military personnel are set to be deployed for the NATO mission.

Almost two weeks ago, it was announced that 6 RCAF CF-18 fighter jets would join the NATO mission in response to the Ukraine crisis.

Just a couple of days ago, UK and France deployed eight fighter jets to Lithuania and Poland to strengthen NATO air defenses.

Polish and British air force contingents began patrolling the space over the Baltic States on Wednesday. The patrol is set to last for four months, reports ITAR-TASS. The contingent has around 100 military men, including technicians, doctors, support group, communications and other specialists.

It followed hot war rhetoric a week ago by US Secretary of State John Kerry.

“If Russia chooses the path of de-escalation, the international community â€“ all of us â€“ will welcome it. If Russia does not, the world will make sure that the cost for Russia will only grow. And as President Obama reiterated earlier today, we are ready to act,” Kerry said.

â€œThe Russian minister assessed the growth of the US and NATO forcesâ€™ activities in Eastern Europe as unprecedented. He also underlined the fact that those actions are accompanied by provocative statements by NATOâ€™s Secretary General about the need to withhold Russia,â€ the statement from the Defense Ministry said.