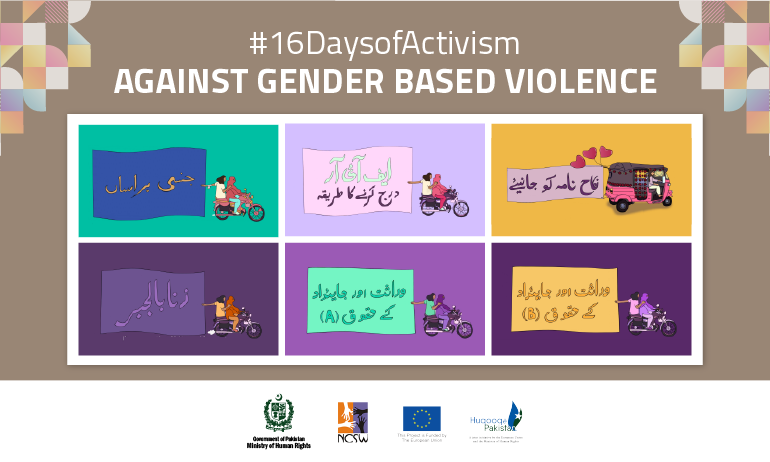 The Ministry of Human Rights is conducting a 16 Days of Activism Campaign on women’s fundamental rights through a series of short informational videos that cover important topics including sexual harassment, rape, the marriage contract, filing an FIR, and women’s inheritance.

The films have been developed in collaboration with the National Commission on the Status of Women (NCSW), the European Union in Pakistan, and Sharmeen Obaid Chinoy (SOC) Films.

The films are being broadcasted widely across social media through live watch parties that will be conducted through-out the 16 days of activism from 25th November 2020 to 10th December 2020.

The films will be disseminated to numerous schools and colleges across Pakistan, as well as amongst NGOs and the Civil Society members to increase outreach.

Several engaging radio shows are also being conducted with leading lawyers and human rights experts, to generate greater awareness around these issues and stimulate discussion and dialogue at the grassroots level.

During the campaign, the Ministry of Human Rights also raised awareness about its’ national 1099 human rights helpline application that has recently been launched on the Google Playstore.

The application has been developed in collaboration with UN Women, to streamline and strengthen grievance redressal mechanisms against human rights violations, particularly with regards to Gender Based Violence and Child Abuse.

Since the helpline itself was launched in November 2018, it has received over 450,000 calls, 49% of which were related to Women’s rights. The app gives women an alternate way to seek help or legal advice, even when they are in situations in which they cannot speak.

Increasing awareness about human rights laws is one of the key priorities of the Ministry of Human Rights. Educating women about relevant legislation that is in place to protect their rights, and how to use complaint and grievance redressal mechanisms to seek justice is critical to empowering them and safeguarding their rights.

Divorce Is Not Easy, But It Could Be The Best Decision You Ever Make, Says Rubya Chaudhry
Is YouTuber Shahveer Jafry Getting Hitched With A Fashion Designer Soon?
To Top