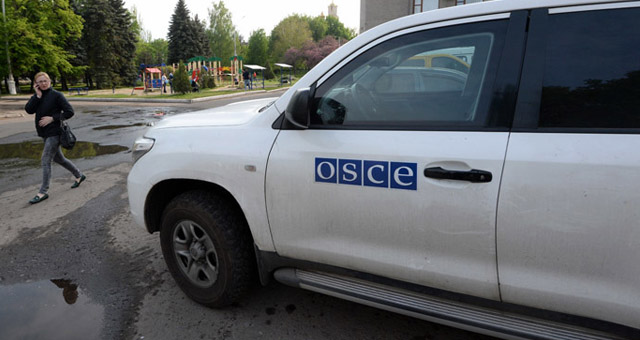 The military OSCE observers captured by anti-Kiev activists in Slavyansk, on April 25, have been released and delivered to Donetsk, where they met representatives of the Council of Europe, said the Russian mission to the OSCE.

“All 12 people I have on the list were freed,” Lukin stated.

Last week, the military observers were captured by anti-Kiev protesters who accused them of espionage. Earlier one of the detained – a Swedish officer suffering from diabetes – was released.

Lukin stressed the release of the observers wasn’t a bargain. “It was a voluntary humanitarian act, and we’re very grateful for it to those controlling the city,” he said.

Lukin has delivered the OSCE observers to Donetsk and they have met with representatives of the Council of Europe, according to the Permanent Mission of the Russian Federation to the OSCE.

â€œAs soon as they are transferred to the representatives of the Council of Europe, weâ€™ll be able to say that the mission is over,â€ Lukin said earlier.

On the way to Donetsk their car came under fire, but all of them are fine, one of Lukinâ€™s colleagues, who was with the observers in Slavyansk, Evgeny Kozhokin, told RIA Novosti.

The interim Ukrainian government is supporting the mission carried out by Vladimir Lukin, including aid in establishing contacts and coordinating activities at a central administration level, the Ukrainian Interior Ministry stated, as quoted by Interfax news agency.

â€œVladimir Lukin was advised of a safe way from Donetsk to Slavyansk, with transportation. The Ukrainian security forces insist on this, being responsible for the lives of both the observers and the negotiators,â€ the statement said.

Vladimir Lukin is Russia’s official envoy to Ukraine. He initially had difficulties in entering Slavyansk as the Ukrainian army and the Right Sector militants refused him access to the city.

The Kiev government was initially reluctant to support the mission.

â€œWe get the impression that the Kiev administration views the mission as something handicapping their plans to start the attack on Slavyansk in the coming hours,â€ Russiaâ€™s Foreign Ministry said on Friday.