The HBL Pakistan Super League season 3 has been absolutely lit and two former champions of the tournament are to meet in the final in Karachi once again. With cricket finally home, Pakistan has showed its support for the PSL, as thousands poured into the Gaddafi Stadium Lahore to witness the semi-final between Karachi Kings and Peshawar Zalmi.

The thrilling semi-final between Zalmi and Kings proved to be more than just a match, especially on social media. Karachi Kings failed to chase down the target set by Zalmi, thanks to a brilliant knock by Kamran Akmal. Even though Kings’ Babar Azam tried his best for the team, the strike rate was too low to chase 177 runs in the allotted 15 overs. 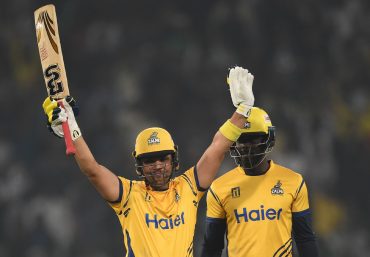 Throughout the match, Pakistanis on social media stayed alight and trended the hashtag #PZvsKK – under which a series of brilliant tweets followed. There was humor, pain, grief, adrenaline and wit everywhere. Here are some of the best tweets from the encounter:

PCB leaving no stone unturned to have the eliminator to tonight. Using a chopper to dry the field. That’s why the PSL hashtag is Dil Se Jaan Laga De. #KKvPZ pic.twitter.com/D257drxUSN

Babar Azam is a good batsman but to be a great batsman he needs to play for his team. #KKvPZ

Many started to blame Imran Khan for the loss Kings faced…

It was written in the stars… all along…

Sadly, this banner has become the biggest talking point of the match

And then Aamir booked a Careem for Karachi, as soon as Lala left..

No doubt, had the match not started, Karachi would have been in the final…

When your father catches you while smoking so you stand there , acting like a shareef bacha. #KKvPZ pic.twitter.com/G9uoFPG7Db

And it rained on the same day too, coincidence? I think not… (dhanan dhanana dhana dhanananananan)

Indeed, the biggest winner of the match was Pakistan! Welcome home, PSL

It’s not about Karachi or Lahore, it’s all about cricket and Pakistan. And yes, cricket has won ?
Pakistan Zindabad ????#KKvPZ #PZvKK #KarachiKings #PeshawarZalmi

With the final to be played in Karachi, a lot of those jokes might backfire on Lahore on the day of the big match. Also, we’re pretty sure we can expect even crazier things when Islamabad United face Peshawar Zalmi in the National Stadium Karachi on the 25th of March. Pakistan is BUZZING!!