Mehwish Hayat Clarifies Herself After A Video Of Her Refusing To Talk About Kashmir Leaked!|Parhlo.com

Mehwish Hayat has been caught up in a recent controversy, though not the first time, where a leaked video shows her avoiding a question related to Kashmir and its circumstances. People believed this to be disrespectful considering that an actual genocide is currently going on within that region. Not to mention, Mehwish Hayat has always been vocal about the atrocities in Kashmir yet, in that video, she skipped the question that asked about the region. However, Hayat posted her response to the issue on Twitter.

Here is the video that got Hayat into trouble:

The leaked video displayed Hayat remaining as rigid as possible when it came to the question about Kashmir. A lot of social media users then decided to lash at her for denying to talk about an issue that genuinely needs media coverage. Though, Hayat did not let the people talk for long as she took to Twitter to clarify herself.

She posted about the event and said, “The leaked video is being taken out of context. I’ve been the most vocal on Kashmir issue globally and will continue to do so. I have big plans for the next steps. This was a charity event & was requested by the PR not to be political and not distract from the orphans I was there to help” 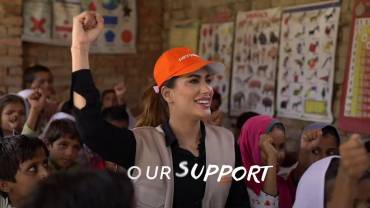 Some believe that her argument appears as valid while others mention that the concern with Kashmir is important so as a celebrity one should have talked about it. Nevertheless, Hayat’s stance is acceptable as well because she clearly mentions she didn’t mean any disregard by refusing to talk about Kashmir.

Then, she went to upload a clip of herself from the same event. She captioned it with, “Not that any clarification is needed. But here are clips from the same event as the leaked video where I think I am talking abt Kashmir – there are several others as well. Before defaming me in future – look at the whole picture first”

Not that any clarification is needed. But here are clips frm the same event as the leaked video where I think I am talking abt Kashmir – there are several others as well. Before defaming me in future – look at the whole picture first. Tarnishing my image in this way will not..1/2 pic.twitter.com/VVYEIoU4qn

She then further added, “Tarnishing my image in this way will not stop me from fighting for the Kashmiri cause as I have been. I am humbled by the fact that my opinion means so much. I see it as a responsibility and will not shy away for fighting for injustices where ever I see them”

Then, a bunch of people came to her rescue including some individuals from the entertainment world. Here are some of the reactions from them:

Famous singer Shehzad Roy called Mehwish Hayat his colleague mentioning that her effort overspreading the issues of Kashmir, is tremendous. A lot of people agree with Roy’s tweet!

The way you articulated the human rights violation in Kashmir and passionately promoted pakistan and the way it was reported in the international media, makes me a proud Pakistani. As Colleagues we are behind you. You don’t have to give clarifications for any leaked video https://t.co/gljW5ZDqJn

The journalist Iqrar ul Hassan also shared his thoughts regarding the on-going controversy and displayed his support!

It’s a dream of every Pakistani Artist to work in Bollywood but recently Mehwish Hayat proved by criticising Indian Policies that she loves her Country more than her Career… We all know she has always been vocal about Kashmir and Indian policies 👍 https://t.co/QsXlVsxerp

Mehr Tarar believes that Hayat doesn’t deserve the slander that she got for avoiding the question.

Try to be rational once in a while, it doesn’t hurt: if Mehwish had been asked by God-knows-who to not talk about Kashmir, would she reveal that on camera?

Punjab Police Finally Arrests Man Responsible For Heinous Crimes Against Children In Chunian!
Youngsters In A Land Cruiser Robbed Food From A Delivery Rider Worth Rs. 25,000 In Islamabad!
To Top